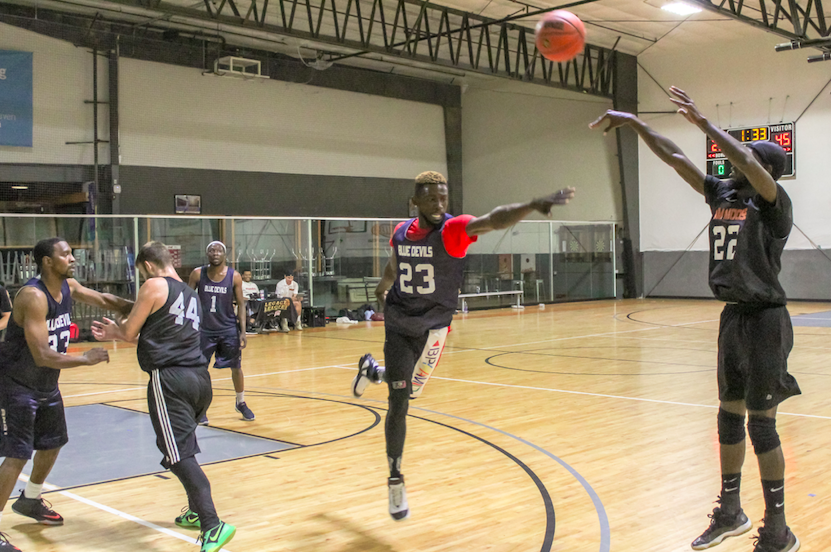 The defensive effort from Team Moose Monday night was the story as they were able to hold the Blue Devils to only two first quarter points en route to a 63-43 victory.

Team Moose has been able to pride themselves on defense and have given up less than 60 points in three of their first four games to start the season. Their entire roster has bought into this philosophy resulting in them being able to defend very strongly as a unit.

“I came over here and they play a hard brand of team defense and that’s we are going to bring week in and week out,” Team Moose’s Melquan Horton said.

The strong defense resulted in a lot of physical play in this contest Monday Night. There wasn’t a bucket scored until the five minute mark of the first quarter. Team Moose was able to battle through with their strong team chemistry and started moving the ball leading to efficient scoring inside the three point line.

Team Moose shot 55 percent from the field and were led by Jackson Meschanic who had 20 points.

“I expected that, I expected it to get a little bit chippy,” Horton said. “It’s competitive, everybody is out here trying to win. I wouldn’t think anybody would try to play ball if there wasn’t a little bit back and forth.”

Team Moose moves to 4-0 on the season as they face Nothing Easy in Week 5. The Blue Devils were led by Matt Marconi with 17 points, but drop to 0-4 on the season. They will look to get their first win next week against Sportslook.

Horton has been around the league for many seasons, but can tell this team is different.

“I been playing with a couple of different teams and I don’t think I have played with a team that is as willing to play together and as unselfish than this one,” Horton said.