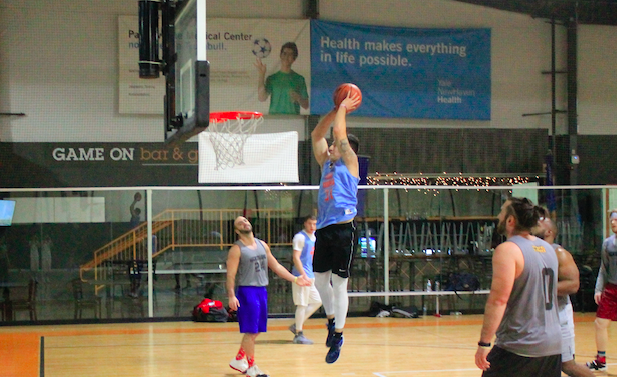 The Flint Tropics dominated again, easily handling NickStrong on Monday night, 92-67, behind a strong defensive battle and stellar offensive performances from its stars. NickStrong never had a legitimate chance, trailing by double digits after the first quarter and never settling into an offensive groove thereafter.

Mike Bozzuto remained a consistent offensive threat, scoring 25 points with seven rebounds and three assists. Nick Japs added 15 points and six rebounds in the win, and every player on the roster scored at least three points. The Flint Tropics outperformed NickStrong in all facets of the game, a result of the team’s combination of pure, raw talent and depth.

“Our defense was definitely the key tonight,” Dom Migliaro said. “Any time you can hold a team under 100 points it’s a good night, especially under 60. We came in and made sure we stopped them early and that’s all credit to our defense.”

The Flint Tropics, one of two remaining undefeated teams, face a very tough matchup next week against The Chasers, who have been an extremely difficult team to play against this season. Expect that game to be one to keep an eye on as two heavyweights battle it out against each other.

In the loss, NickStrong dug itself into a hole that it could never really get out of. The Vessicchio brothers shined once again, with Anthony scoring 29 points and Michael scoring 18 points, even though they couldn’t pull out the victory. They return to action next week looking for their second win of the season against Sportslook, another tough matchup for them.