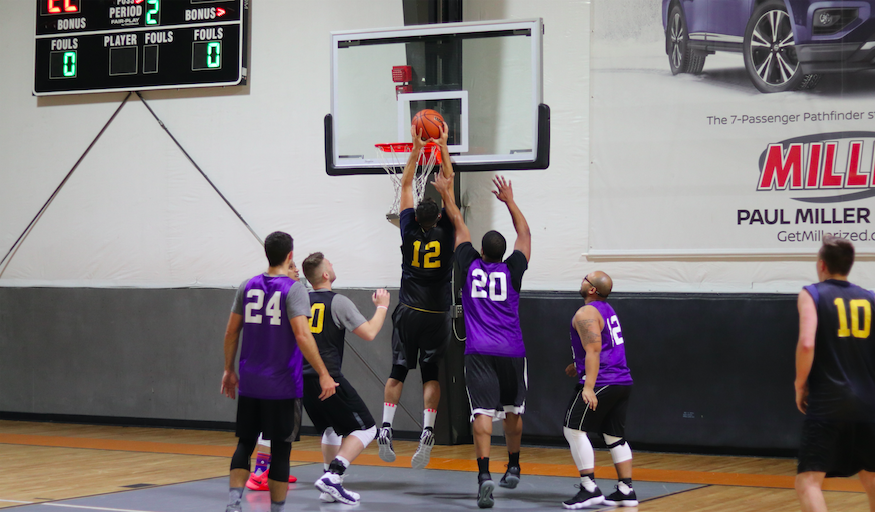 “Doesn’t matter who we play, we’re going to play tough defense for 40 minutes every time we step on the floor,” Flint Tropics’ Matt Cyr said.

And play tough defense they did, dominating the glass 38-23 against the The Throne. They did it by being physical and executing successful boxouts against a big team. Summer 17 All-Star Mike Bozzuto continued to stuff the stat sheet with 16 points, six rebounds, and two assists.

Matt Cyr and rookie Nick Japs also were in double digits with 14 apiece, with Cyr getting the double-double with 10 rebounds. The Flint Tropics leads the Legacy Leagues with 54 personal fouls as a team, but that doesn’t slow them down from pulling out hard fought wins.

“We have fun and we play physical,” said Mike Bozzuto.

They’ll look to keep the good times rolling and continue to “get tropical” against Semi Pro (0-3) next week.

The Throne have now dropped two in a row, losing last week to the Monstars (1-1) after a convincing 113-37 over Semi Pro in week 1. Legacy Leagues rookie Jason Hernandez was on fire from behind the arc tonight converting six of 11 from three and put up 30 points to lead The Throne in scoring.

The Throne got frustrated with the toughness of the Flint Tropics, and it threw them off their game for long stretches. The Week 1 Player of the Week Joe Baccielo had a quiet night with 13 points and was kept in check by the defense most of the night, but continues to be a force with giving his team more chances to score with nine rebounds. They’ll look to get back on the winning side of the column next week against The Chasers (2-0).

The Flint Tropics had one more final message to the rest of the league: