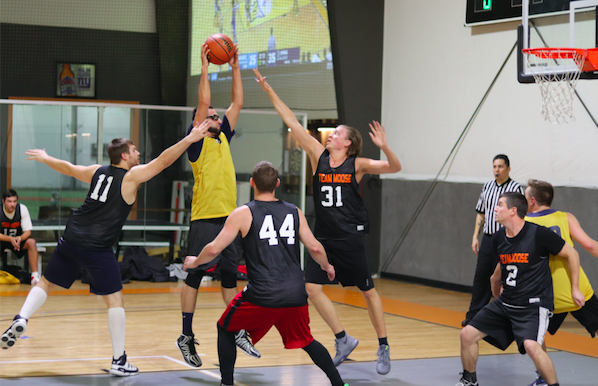 The Flint Tropics got their first win of the season Monday night, defeating Team Moose, 52-35 in a low-scoring matchup.  A game that was dominated by fouls and turnovers, it was ultimately the Tropics defense that allowed the team to close out and seal the win.

Team Moose started the game on a 9-0 run and contained the lead up until the final seconds of the first half. They were down one going into the third, but never saw the lead again. The Flint Tropics defense shut them down, only allowing 16 points in the second half.

“We were down 9-0, but with hard work we just stuck with it,” Flint Tropics Cody Doubleday said. “We defensed up and only let up 35 points.”

Aside from adding seven points, Matt Cyr had two blocks and two steals for the Tropics defense.

The first half was slowed down by turnovers and fouls by both teams. The two teams combined for 29 personal fouls, but neither had a player foul out of the game. Mike Bozzuto of the Flint Tropics and Tyler Disabella of Team Moose were the only players to not record a foul.

On the offensive side, the Flint Tropics were powered behind Japs’s 23 points and six rebounds. Bozzuto posted 14 points and two assists for the Tropics.

Team Moose had contributions from their entire team, with each player scoring at least one point in the game. Kevin Blake lead the team with 11 points. Rob Harrigan, Josh Balabuch and Brad Seaman each put up five points and combined for eight rebounds.

The Flint Tropics were able to break open the game in the second half, outscoring Team Moose 32-16 in the final 20 minutes.

Team Moose currently have a 1-1 record and will play Stranger Danger next Tuesday night. While the Flint Tropics currently hold the same record, they will face The Throne and Joe Baccielo Monday night.

“Who?” Doubleday asked about Baccielo, who posted 51 points in Week 1 against Semi Pro, earning him Player of the Week recognition.

“We don’t know who that is,” Japs said. “We’re excited for every week.”