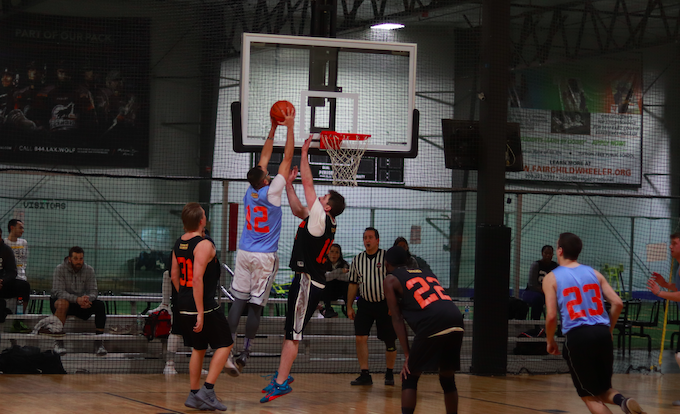 The Flint Tropics was able to pull off a 58-54 victory in overtime against Team Moose on Monday, and demonstrated the high-power offense they are known for. It was a scrappy game back and forth, as both teams fought hard and traded leads the entire game.

Much like their first game, Team Moose got off to a hot start going on a 13-4 run and extended the lead to 18-9 at the end of the first quarter. After a rough start, Flint was able to challenge Team Moose’s defense and outscore them in the remaining quarters and overtime.

“Once we knew we started hitting [threes], that’s what helped us win the game,” Flint Tropics’ Dom Migliaro said. “We just had to find the right rhythm, and the right shots.”

The Tropics were led by a combined 37 points from TJ Gianni and Mike Bozzuto. Gianni poured if five three-pointers on 6 attempts, shooting an unreal 83 percent from downtown. In the third quarter, back to back threes and back to back posterizing dunks from Gianni sparked a massive run for the Tropics.

Kevin Blake was the leading scorer for Team Moose with 21, as their offensive struggles continued late in the game. Flint was able to jump to a lead quick in overtime, and hold it for the rest of the game.

This was a big win for Flint Tropics, and a huge test to their offensive prowess by Team Moose’s tough defense. When asked about what next week will bring for Flint, Migliaro said they will, “Start the games better, and just get a good finish. On to Young Kings.”

Flint Tropics play the Young Kings next week as they look to remain one of the few remaining undefeated teams in the league. Team Moose will try to regroup on the bye week they have next week, and come back strong with a win in 2019 when the league comes back after break.