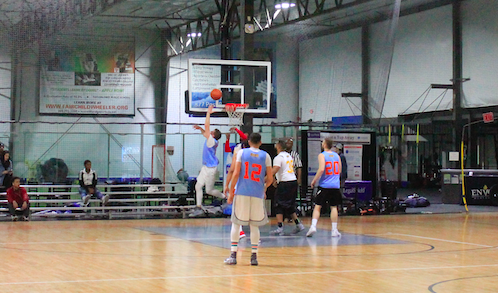 Even with Flint Tropics rough start Monday night, they came out with a big time win against one of the best teams in the league, beating Shocker City 73-60.

The Flint Tropics came out of halftime with an explosive energy. Their big three lead the way: Mike Bozzuto, who had a double, double with 18 points, Mike Druan, who had 14 points, and Dom Miglario, who had ten points and five assists. Migliaro was spectacular, helping his team break through one of the toughest presses in the league while also helping his team build a lead in the second half.

“We played through the pressure,” the Flint Tropics Dom Migliario said. “We just played a great team. We played good defense and made plays on the offensive end.”

This wasn’t an easy win for the Flint Tropics. Mike Davis dropped 15 points and couldn’t be guarded at times.

“There’s no stoping him,” Migliaro said. “We just had to slow him down some type of way. We still prevailed and our offense kicked in today and helped out a lot.”

Diontay Washington struggled from the field shooting a horrendous 20 percent and was definitely rusty. With time left in the season this rust will definitely come off. Diontay and Jerry Washington will be a tough duo to stop, even for the undefeated Flint Tropics should these teams meet again.