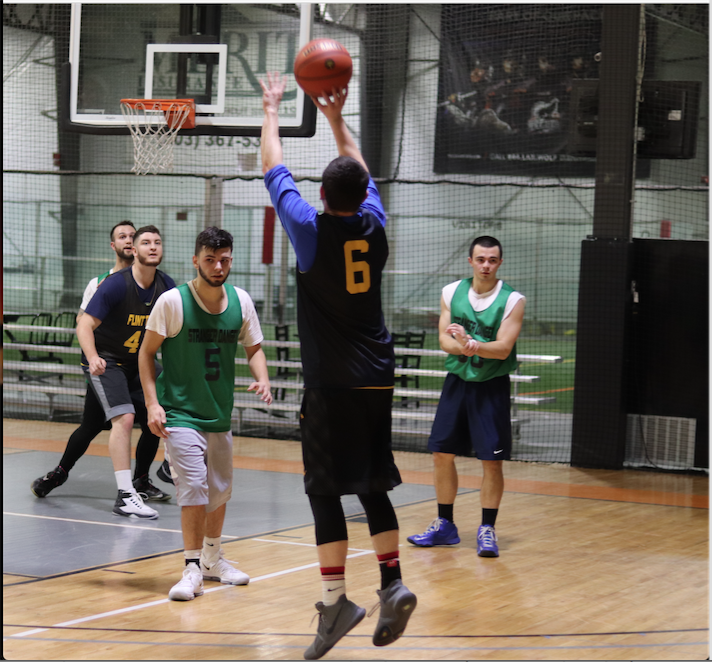 Stranger Danger (2-4) looked like strangers playing together on the court on Tuesday night against the Flint Tropics (5-1) in a lopsided, one hundred point, 150-50 victory for the Tropics.

The game appeared to be over before opening tipoff, Stranger Danger scored only three points in the first quarter and 18 points to end the first half. The Flint Tropics scored early and often hitting the 100 point mark right before the third quarter ended.

Seven Flint Tropic players were in double digits in points. Mike Bozzuto led the way with 49 points, converting on 22-of-26 of field goal attempts and grabbing 11 rebounds. TJ Gianni followed Bozzuto’s performance with a player-of-the-week showing with 38 points and a rebound shy of a double-double. Flint shot 63 percent from the field as a team and an astounding 46 percent from beyond the arc. Their 62-24 rebounding advantage led to plenty of second chance points.

Wearing “Flint vs Everybody” shirts, the Tropics were motivated to earn respect and appreciation within the Legacy Leagues. Now sitting at the number three seed, they have gotten the respect they deserve.

Stranger Danger could not find the bottom of the net in what seemed to be all night, but especially in the first half. Shooting only 28 percent from the field and turning the ball over 20 times a lost was inevitable. Matt Zocco was one of the one bright spots tonight for Stranger Danger recording 21 points and six rebounds. Playing with only a one man bench, they found themselves trying to keep up with the Flint Tropics, but they were too quick for them on Tuesday.

Flint gets a marquee matchup with The Chasers (5-1) next week, while Stranger Dangers looks to get back on track against Goon Squad (2-4).

“We’re on to The Chasers,” said Joe Catalina. “Flint vs everybody.”