Flint Tropics use second half comeback to defeat Rim Breakers 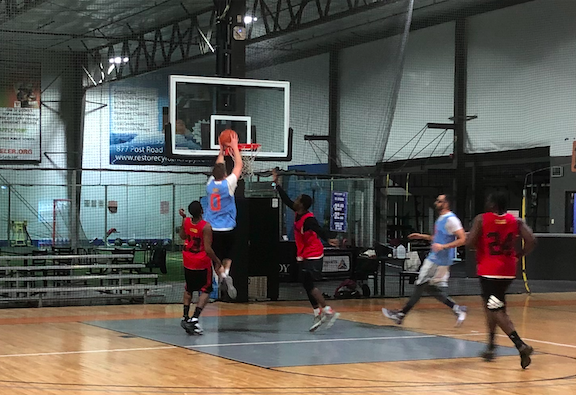 The Flint Tropics, in their brand new bright blue uniforms with bright orange lettering, came out a little sluggish to start their Winter 2019 campaign against the Rim Breakers. The Rim Breakers’ Richard Bronson torched the Tropics in the first half en route to a 30-point night. The real story, however, came as soon as the ball was inbounded to start the second half of play.

The Flint Tropics outscored the Rim Breakers in the second half by a commanding 41-19 margin and erased a 10-point Rim Breakers halftime lead. This was a combination of arguably the leagues two best two-way players in Mike Bozzuto and Mike Druan who led the team’s offense. Bozzuto with his straight scoring ability, lead the team in scoring with 18 points, and Druan’s efficiency from the field, knocking down an impressive 78 percent of his shot attempts and added 14 points.

The final score was much closer than the game actually was as we got later into the game. On a day that saw multiple teams get held to a low point total, a combination of poor shot selection and sloppy ball handling late in this game gave the Rim Breakers fits.

While it was obvious the second half for the Rim Breakers did not go as well as the first, the struggles for the Rim Breakers started in that second quarter where shots stopped falling. In their case, the Flint Tropics were having the same type of struggles scoring the basketball, so the issue was not too prevalent.

Flint outscored the Rim Breakers 56-33 after the Rim Breakers jumped out to their 28-16 lead at the end of the first quarter. Outside of Bronson, no one on the Rim Breaker roster cracked double digits. Adding to the frustration, the team only shot 39.2 percent from the field. A bright spot for this team was how well they shot the three-ball. The Rim Breakers were 11-of-23 behind the arc, accounting for more than half the teams’ points.

Next week the Flint Tropics will match up with Team Moose (1-0) who are fresh off of an impressive win against Young Kings. The Rim Breakers will look to bounce back as they take on Gentelmans Club (0-1), who took an ugly 103-45 loss tonight to The Chasers.