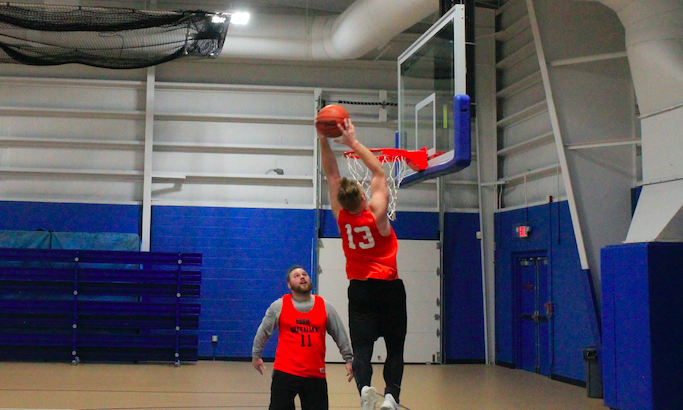 Two great teams matched up Wednesday night where Boom-Shakalaka was able to take down the Alaskan Bull Worms, 90-66. After the first quarter the game was fairly even with Boom-Shakalaka having only a five point lead.

Boom-Shakalaka was led by Brandon Sweeney who had an insane night for his team tallying 42 points and nine rebounds in his teams crucial victory.

“We pushed the ball, got offensive rebounds, and made open looks”. Martin said, who also had a night to remember as he collected a triple-double with 14 points, 10 rebounds, and 10 steals.

“A lot of steals, a lot of rebounds, a lot of buckets,” Martin said. “We need to get a little better on defense and need to have enough guys here to play.”

Boom-Shakalaka made the most out of having only four players on Wednesday night. With each man scoring in double figures, they showed that they can be an offense that spreads the ball around well which will be crucial come playoff time.

Both of these teams have the offenses that are needed to go deep into the playoffs, its going to be a matter of each teams defenses can hold up coming down the stretch.