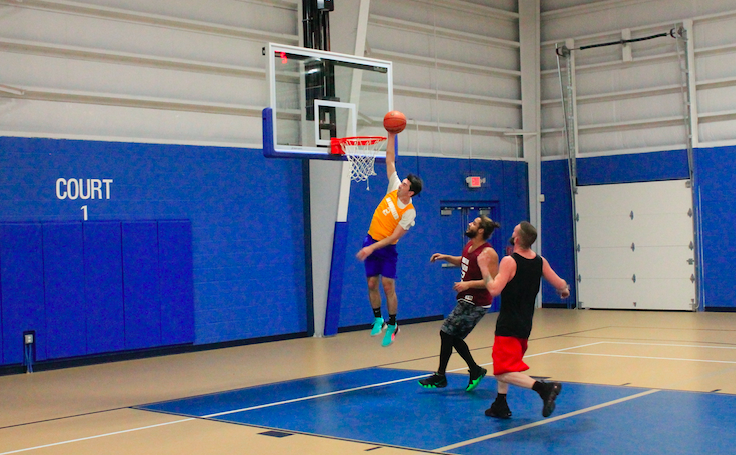 The Skyhookers were able to defeat Boston Blazers by a final score of 66-58 on Wednesday night in Rhode Island. In the Game of the Week, they came into this game as underdogs and were able to prove that they should not have been overlooked.

Every player on the Skyhookers roster scored tonight, with Brendan O’Donnell leading the way with 23 points, nine rebounds and three assists. Chase Almond was pounding the glass and added 11 rebounds in a strong defensive showing.

The Skyhookers were able to make it to the free throw line 18 times, making 13 shots, which would ultimately be the difference in the game.

“We locked up on defense and when we went to the line we hit our free throws,” Nolan Dubois said. “They played with a lot of tenacity and played very quick with a lot of quick transitions but we were able to hold them off which was ultimately the goal.”

Dubois was sent to the free throw line eight times out of Skyhookers’ 18 foul shots. He finished with 11 points, four rebounds and an assist.

This was a big victory for Skyhookers, as they are trying to avoid falling to the bottom of the pack with one week to go until the playoffs. They will be hoping to wrap up their regular season on a positive note next week as they continue to fine tune for the playoffs. This is a team that always plays well when they are the underdog so expect them to make some noise in the coming weeks.

In the defeat, the Boston Blazers fell to 3-4 on the season and it was a crushing loss to a heavily favored team despite the evenly matched records going into the contest. Corey Strickland, Evan St. Pierre and Peter Vajabedian all scored in double figures but, the Skyhookers were still able to beat them because of foul trouble. Take away the free throw opportunities and the Boston Blazers should have won this game, and that is something they are going to need to work on moving forward.

Boston Blazers are a team that can’t afford to lose another game heading into the postseason and face a tough matchup next week against the Halfway Crooks. They are going to need to win or stay close in the game in this matchup if they want teams to take them seriously in the postseason.