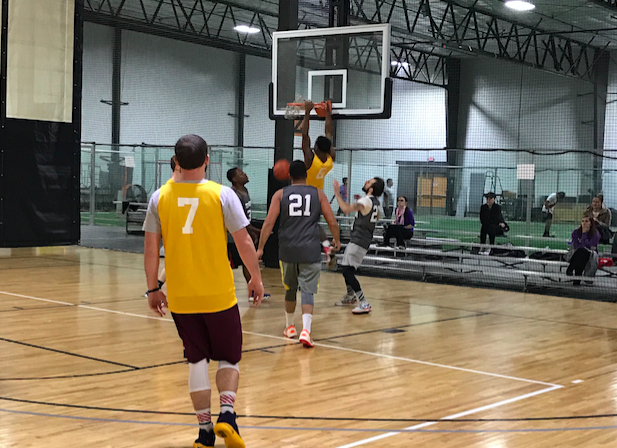 Very rarely does a game with a degree of hype live up to the expectations set upon it. Tuesday’s Game of the Week lived up to the hype, and more. It was a nail-biter topped with a fourth quarter push by the Temptations that nearly sent the game into overtime, if not for a missed shot at the buzzer.

Both teams scratched and clawed trading buckets throughout the first half. The tone was set and it was clear that these two teams were going to be in for a battle.

After going into halftime up just three on the Temptations, an unfamiliarly small margin for No Limit, it was clear that the “big three” of Howie Miller, John Rullan and Tarell Vargas were going to have to be finishers in the second half. When asked how they were going to close it out in the second half, Vargas, who had himself a terrific night tallying 31 points and seven rebounds, was very clear that defense was the key.

“[We have to] play defense and stop fouling,” Vargas said. “Play defense with our feet, not our hands. We have to play our game. Play No Limit basketball and we’ll get the win.”

No Limit did play their game, but that of course includes shooting threes. Every time it seemed like the Temptations were going on a run, No Limit would drill a couple of threes and gain back control. After going into the fourth quarter down ten points, the Temptations looked to their top scorer to provide a spark.

Carmine Santorelli rose to the occasion, scoring 15 of his 39 points in the fourth quarter and doing everything he could to nearly tie the game. Despite his best efforts, the Temptations would lose by three points to the leagues best three-point shooting team.

“We had a game plan coming in and we didn’t follow it,” Santorelli said. “We just let them shoot threes. If we did what we said we were going to do and stayed in front of our men we would have been up.”

Howie Miller and John Rullan, the other two heads of the three-headed monster, were in double digits again notching 19 and 15 respectively. While scoring from the field was not an issue, a poor performance from the free throw line (7-20) would nearly cost No Limit the game.

Despite the tough loss the Temptations looked strong once again getting solid performances all around. Fred Milfort and Chris Dias would each score 16. Dias added eight rebounds, while Milford snatched five rebounds with had three steals. Erik Silva would contribute a humble double-double of 11 points and ten rebounds as well.