From unknown to undeniable contenders: the BS&B story 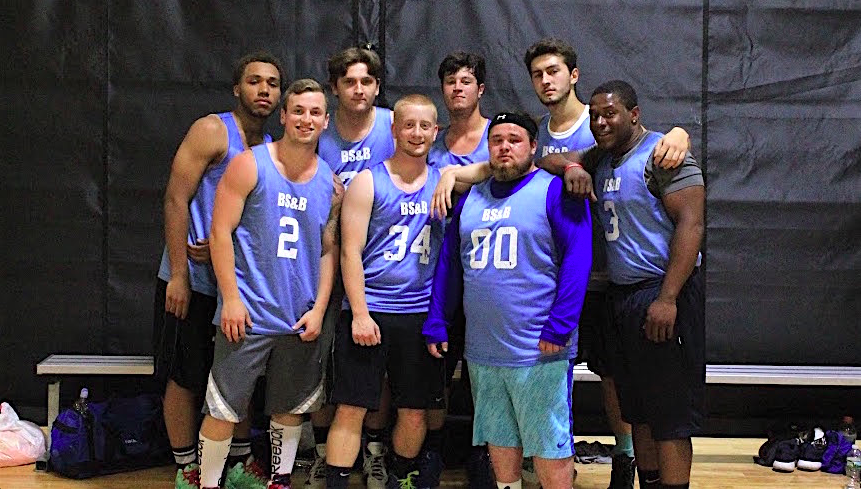 Everyone, in one form or another, goes through a time in their life when people doubt their abilities. The doubt affects people differently, sometimes becoming so constricting and too much to overcome, while other times people respond by elevating their performance with a “we’ll show you” spirit.

As if going through that in real life is not enough, one team also went through that on a weekly basis on one of the few places where people come to have fun and escape those exact real world pressures: the basketball court.

In the inaugural season of the Legacy Leagues, Blood, Sweat and Beers were disrespected from day one, simply because they were the team that entered the league without knowing anyone, even me as the Commissioner.

A phone call from an unknown number back in April started what would be one of the best runs by an unknown team that this league may ever see. Being able to shine light on a team that has truly earned it is what makes telling their story so much fun. 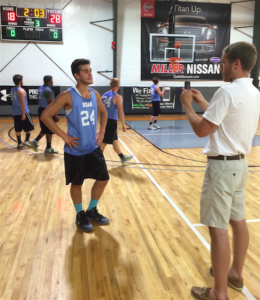 BS&B’s Cody Dileonardo gets interviewed at halftime of his Week 3 game against The Brotherhood, his team’s only loss to date.

As I have gotten to know the group of guys from West Haven, Connecticut who make up the team with, in my opinion, the best team name in the league, a couple things have stood out.

On almost a weekly basis early in the season, these guys would make little comments about things being said about them, like, “We see you guy not picking us,” or “We see the lack of respect from you guys.” Most of the time, those snipes were followed by a “We don’t really care,” when it was clear that meant the exact opposite: those guys did care (who would honestly NOT care at all).

With the season coming to an end, it’s much easier to see just how much they cared, and how each one of them used that as motivation every time they stepped on the court.

“We felt like we had to prove something,” BS&B’s Austin Kozak said. “We had to make you guys know we can play. We had to earn the respect, we didn’t just expect it to be given.”

Earning respect is never easy, but this Blood, Sweat and Beers team managed to do it in a way few outside of their own team saw coming. En route to earning that respect, this team not only battled their opponent, but also the initial perception other people had of them.

TAKING THE COURT WITH SOMETHING TO PROVE

After starting the season 2-0, to the surprise of many of the league’s analysts, Blood, Sweat and Beers’ first test came in Week 3 against The Brotherhood, who has proven to be one of the most dominant teams in the league.

Despite holding The Brotherhood to their lowest point total on the entire season to date (69 points), Blood, Sweat and Beers was unable to knock off the still-undefeated squad. That loss in Week 3 would be Blood, Sweat and Beers only loss through their first eight games, as they have continued to prove that they are a top team in the league by slowly (and I mean extremely slowly) earning the respect of everyone watching.

Blood, Sweat and Beers has not tasted defeated since Week 3, beating opponents by at least 16 points in all but one game during that stretch. BS&B has achieved their 7-1 record by playing team basketball, so much so, it is almost time to put their team picture next to the word “team” in the dictionary. 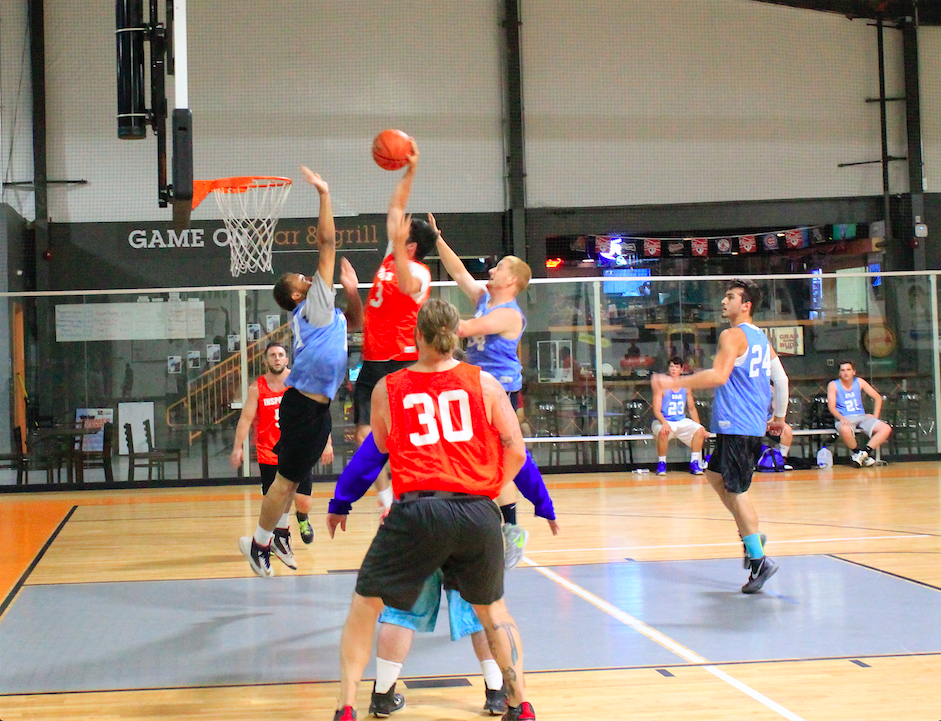 It was not until Week 8 when the first Blood, Sweat and Beers player hit the 20-point mark, when actually both John Brolet and Cody Dileonardo reached that plateau.

“We just have great teamwork and that’s what we lean on,” Brolet said. “The thing about our team is we have a lot of great players, so any of us could have a good night. I am pretty sure every week we have a different player to watch. We have a lot of people that can score.”

It is not just the multitude of capable scorers that has propelled Blood, Sweat and Beers to the top of the Legacy Leagues standings this season.

WHAT MAKES THIS TEAM SO DANGEROUS?

When this team first walked into Insports in Trumbull, Connecticut, I am not going to lie, I thought my Run TMC team would be able to compete with them and win most of the times we played. Let me just say, I was wrong, but I know for a fact I was not the only one who has been proven wrong.

The balanced scoring makes it tough no matter what team we are talking about, but Blood, Sweat and Beers consistently plays a style a limited number of teams in this league have been able to keep up with or match. They use a pick-and-roll heavy offense, putting defenders in positions where they have to decide what they want to give up, combined with a handsy, swarming defense making it tough for their opponents to ever get comfortable. 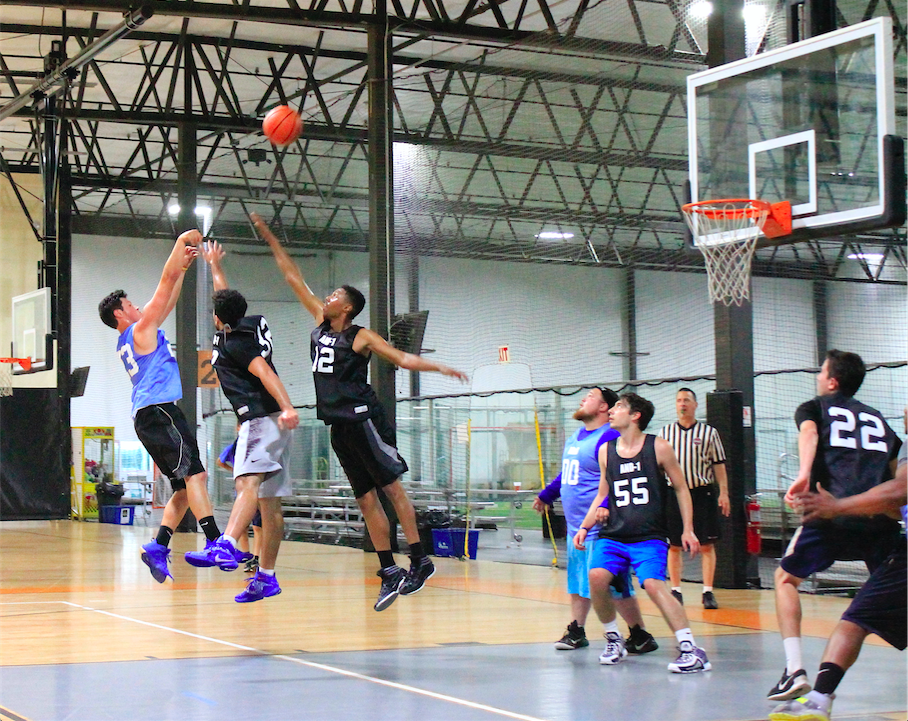 BS&B’s John Brolet sinks a tough jumper over two And-1 defenders in their Week 4 win.

One of the reasons so few teams have been able to maintain what Blood, Sweat and Beers does actually comes from things off the court rather than on them.

“Chemistry,” Kozak simply said. “A lot of chemistry with this team. We just love playing together, we’re all boys, and we have fun out there. That’s the best part.”

“We obviously have a lot of previous history playing basketball,” Dileonardo said. “We play a lot of pickup ball, just us eight, and I think that really helps when you’re playing teams. Like you said, there’s not a lot of teams that have been this close, so I think that kind of helps when you’re in tight games. You don’t lose your cool because you know you have your boys with you.”

It is this closeness off the court that definitely adds another dimension to their elite play on the court. Blood, Sweat and Beers says they met in high school, like many of the teams in this league, and have been playing on low hoops in the driveway for a while now, helping them adjust in this league.

I am not sure if I believe them, but Blood, Sweat and Beers claims this is the first time they have officially played on a team in any sports league together, making what they have accomplished even more incredible.

Each player on the team contributes something: Dileonardo and Brolet are their untraditional post players, constantly slashing to the rim and slamming home lobs. Pat Gilson and John Lutters command everything that happens on the floor, running their defenders into screen after screen, and just taking what the defense gives them. Charlie Dannenberg joins Gilson and Lutters as knock-down shooters, putting constant pressure on the defense from 20 feet away from the basket. Kozak, Eli Todd and Cam Tucker do a little bit of everything, supplying the perfect amount of defense while also constantly cutting towards the hole looking for those pocket passes from their teammates.

Supreme ball handlers with high basketball IQ’s are sought-after in the Legacy Leagues, and Blood, Sweat and Beers has two exceptionally crafty passing wizards doing things on the court that sometimes do not make logical sense. Gilson and Lutters both, at first glance, do not instantly put fear into their opponents, but once they are coming at their opposition with a basketball in their hands, watch out.

“He is just a game manager, man,” Dileonardo said about Lutters. “I forget who said it in the postgame show, but people take him lightly. When you first see him, he’s short, he doesn’t look very athletic, but that man can dribble. He’s a good passer, he can shoot, he’s gotten hot the past couple weeks and we need some shooters.”

That is when the fear strikes in the souls of their opponents: that first behind the head pass, or a deep three-pointer, or that one time Lutters put a bounce pass through his own legs leading to a big dunk.

That was, in fact, Brolet, and not Dileonardo as the font suggested when this play was featured in Week 7’s Top 5 Plays of the Week. Apparently, we are not alone in confusing those two.

TURNING THAT CHIP ON THEIR SHOULDER INTO CHAMPIONSHIPS

As one might expect, after the regular season they have had, Blood, Sweat and Beers are confident they can compete with anyone in the playoffs. 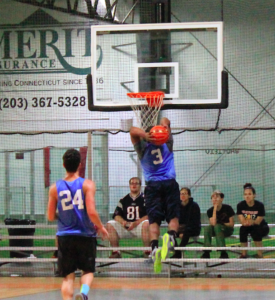 BS&B’s Cam Tucker gets loose for a fast break two-handed dunk as Dileonardo looks on.

“We want to win, and we want to show you guys that we can win every game,” Kozak said. “The stakes are raised (in the playoffs). We hope you guys keep us as underdogs, because we just want to keep proving ourselves to you.”

It looks like being an underdog is well behind them. This past week, a sincerely honest confession was made during the Legacy Leagues Live Week 8 Postgame show that almost certainly was the last bit of validation Blood, Sweat and Beers needed with the playoffs just around the corner.

“BS&B seems to be way too strong, and I certainly have not given them enough credit this season,” Legacy Leagues analyst Sam Leventhal said. “They have completely earned my respect as of now, and I think I might pick them to win again next week as well as most of the way through the playoffs. I think they are a front runner to make that Championship game.”

That sums up what it means to go from unproven to an undoubtedly serious contender in a short two months. Being labeled a front runner to make the Finals is one thing, and actually doing it is another.

This squad is ready to use the proverbial chip they have had on their shoulder all season to their advantage when they need it the most. It will be interesting, to say the least, to see how this team responds in their first single elimination tournament, where everything is on the line and one bad game can flush hopes of hoisting the Napa Auto Parts Championship Trophy down the drains.

“I feel like teams with the chip on their shoulders always seems to have that extra drive in the fourth quarter,” Dileonardo said. “They go that extra mile to get the win, and I kind of like that about us, and I hope we keep that come playoffs.”