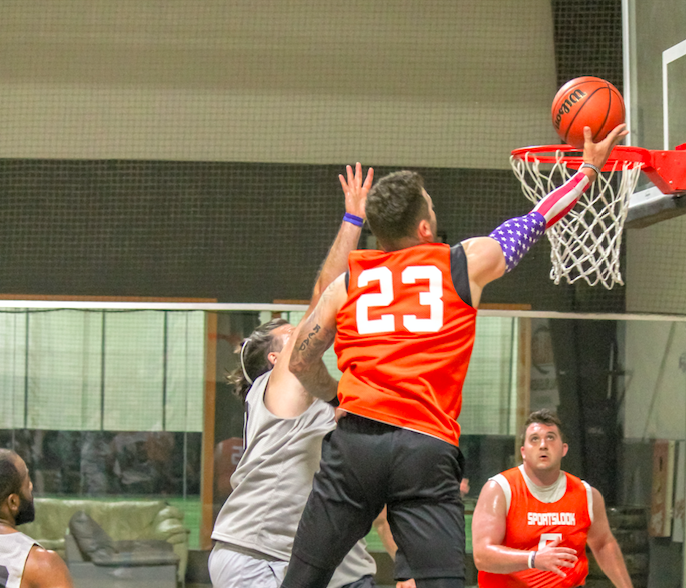 Previously, Sportslook had played with only four players resulting in 0-2 start coming into Monday Night’s matchup against 1-1 NickStrong. Sportslook was able to return their full roster, including Tyrell Holmes, and looked good in their Week 3 victory.

Holmes was a clear difference maker for Sportslook with his ferocity defensively and aggressiveness on the glass and the offensive end. Holmes didn’t fill up the stat sheet but added 14 points and five rebounds. Dan Kokkoros led the team with 26 points on 10 of 16 shooting, added 10 rebounds and hit threes on three straight possessions in the second half. John Zervos also collected 19 points for Sportslook.

“Just hustle. We got our two guys back tonight, Ty and Nick were a huge help. Getting a break definitely helped our legs,” Zervos said.

Hustle was key for Sportslook as they dominated the glass with 37 rebounds and were able to force 7 turnovers. They were able to jump out to a 14 point lead and kept the foot on the gas. Their hustle defensively was key as they were able to hold NickStrong to only 35 percent shooting and Michael Vessicchio to only 14 points. Anthony Vessicchio also added 14 points for NickStrong.

Sportslook will attempt to remain at full strength and win two in a row as they face the Young Kings in Week 4 and NickStrong looks to get back on track as they look to stop their two game skid against Dinner’s Served.

“It feels good man, just have to rest from here and out and stay fresh.” Zervos said.