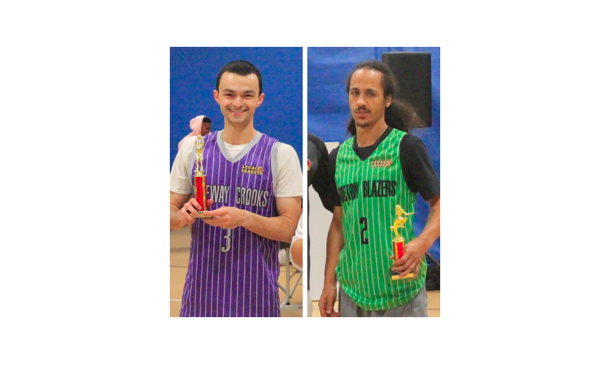 The best shooters and highest fliers from around the league showed up to the Johnston Rec Center on Tuesday night to put on a show in the Three-Point and Slam Dunk Contests.

In the First Round Jason Larosiliere didn’t have his best performance, unable to finish his more complicated dunks leaving him with a score of 52 after two dunks. Jose Mercado unsurprisingly put on a show in the opening round, one of his dunks being a 360 windmill. Mercado finished with 76 and advanced to the Final Round.

Zach Tartaglia had a shaky First Round, but it was enough to move on with his score of 58. Terrence Gallo finished two solid dunks in the first rounds for a score of 66 and did not miss a single attempt.

Jose Mercado, Zach Tartaglia, and Terrence Gallo moved on to the finals.

The Finals was a one dunk affair, and although Mercado and Tartaglia brought some heat, it wasn’t enough to take down Terrence Gallo. Gallo won by showing off his insane vertical by jumping over his teammate, Ade Bright, and throwing down the vicious jam. Gallo edged both of them out by one point with a score of 35 to crown him dunk contest champion!

The First Round was even across the board with everyone putting up respectable scores. Bartholomew and Hanson each scored 12, Crawford scored 14, Dalomba had 15 and Zocco led with 17 out of a possible 30 points.

After the First Round Zocco, Dalomba, and Crawford advanced to the Finals.

Cody Crawford, who is known to be one of the best shooters in the league, had a tough showing in the Finals, putting up just seven points.

Sergio Dalomba was on fire finishing with 18, and putting a lot of pressure on Zocco to beat that number.

Joey Zocco felt the pressure and brushed it right off, hitting the money ball on the last rack to move ahead of Dalomba and to clutch the win. Zocco finished with 19 and made himself the double-champ as the Rhode Island and Connecticut Three-Point champion for the Summer 19 season.