Give Respect where respect is due: BS&B stays unbeaten 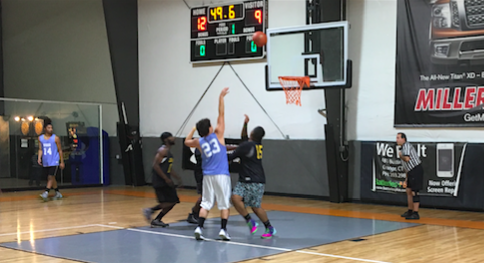 As Michael Masciola hit a buzzer-beating three-pointer to send the game into overtime, the Cereal Killers thought the momentum had finally shifted in their favor on Tuesday night, but were sorely disappointed. Blood, Sweat and Beers who only lead for a mere three minutes late in this game, chose the best three minutes to do so as they grabbed the lead early in OT and never let go, stealing away an upset win, 72 – 69.

After being down 15 points going into halftime, BS&B knew they needed to make some changes, and they did, outscoring the Cereal Killers 41-26 in the second half.

“We came into the second half with the fire in our eyes,” BS&B’s Andrew Sampietro said. “I told you we were going to come back and win”.

Sampietro was a big reason why BS&B pulled out the win, as he dropped 15 points and added two steals to the marvelous win for his squad.

The Cereal Killers were no slackers either with three players scoring in double digits, and Will Hudson added a double-double (19 points and 11 rebounds), Tyrhon Coward (18 points) and Masciola poured in a team-high 20 points and three blocks. After dropping their last two games, the Cereal Killers will look to get back above .500, as they face off against a tough No Limit team next week.

Blood, Sweat and Beers will put their undefeated record on the line next week, as they matchup against a Sportslook team who suffered their first loss Tuesday night and look to turn things around next week.

BS&B has put the league on notice now with the huge upset win, and wear the underdog moniker proudly for a second season in a row. Sampietro put it simply.