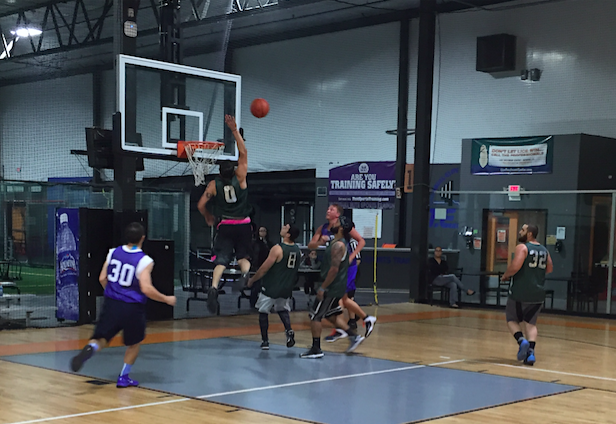 After finding their way back to within five behind Shaq Holman’s back-to-back three pointers, Run TMC started to sense the momentum shift to their favor at the end of the third quarter. Chris Aaron and the reinvigorated Kekambas shut down that uprising very quickly, going on a 24-12 run in the 4th quarter.

Aaron dropped a personal-best 34 points, as the Kekambas won their second-straight, 71-54.

The Kekambas kept Run TMC at a distance during the first half, taking advantage of sloppy passes and bad looks that resulted in easy Kekambas points and a 13-point lead at half.

“They had us doubled up for a little bit and we weren’t playing good defense,” Run TMC’s Brian Blake said. “We need to step up, turn the ball over less, get to the basket and start to really play our game”.

Following Blake’s words, Run TMC came out of the half motivated, climbing back to within five on a 18-10 run, as Ty Alston and Shaq Holman both dropped 14 points.

The Kekambas Davin Sirpenski and Aaron have been the two jolts of energy this team has been looking for since they joined the squad for last week’s game. Aaron added six rebounds, five assists and two steals, as Sirpenski had a tough seven points, six boards, and three blocks. They will look to add their third consecutive win next week as they go up against a fast Temptations team.

“We came out flat, and they made us pay for it,” Run TMC’s and Legacy League Commissioner Joey Zocco said. “It shows how good this league is. You’ve got to come every night.”