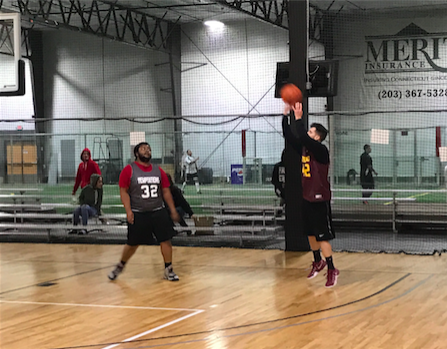 Tuesday’s quarterfinal matchup between the Temptations and Goon Squad provided those of us fortunate enough to watch with back and forth, high-flying, 3-point raining, triple overtime magic. These two high powered teams remember all too well the gritty game they played just two weeks ago. After falling short in the first meeting, it would take some extra time, but Goon Squad would outlast the Temptations, 71-68.

This loss will be difficult for the Temptations to swallow as they must feel as though this game slipped right through their fingers. While the game remained close, the Temptations held a lead the entirety of the first half and would not hand over the lead until under a minute left in regulation. As the half ended with just two points separating them, the Temptations’ anxiety became hard to mask.

“We gotta make shots man. We’re getting open looks, we have to just drain them and play D,” The Temptations’ Erik Silva said. The key to stopping Goon Squad’s offense is slowing down Legacy League’s All-First Team member, Matt Marconi.

“[We have to] stick him with Carmine [Santorelli] and Fred [Milfort]. They’re defensive players, man, they gotta lock him up,” Silva said.

Responding to his team’s plea for a spark defensively, Rookie of the Year and All-Defensive team member Fred Milfort would do his part, turning in a double-double on 15 points and 11 rebounds, as well as making crucial hustles plays with two blocks and a steal.

In addition to Milfort, Carmine Santorelli would continue to bolster his team’s offensive load cashing in on important buckets when they mattered the most. His impeccable knack for scoring at will was a marvel all season, but on a night where he filled up the stat sheet with 24 points, eight rebounds, five assists and two steals, it would prove to not quite be enough.

In a game this close the difference would come down to the little things. As the Temptations took a six-point lead into the fourth quarter, missed open shots and turnovers would haunt them. Despite the Temptations’ best efforts, Matt Marconi’s relentless presence on offense willed Goon Squad to pull off the comeback and send the game to overtime.

Marconi used his ability to slash and draw fouls to his advantage cashing in 11 of his 29 points from the charity stripe. The All-Star captain sealed the game down the stretch for his team with clutch free throws and one absolutely absurd alley-oop on an inbounds play in the third overtime.

Marconi’s stellar performance resulted in a double-double and cemented his position as one of the most cold-blooded scorers in the league. With the absence of the explosive Matt DelMonte, Goon Squad got gutty performances all around as Brandon Massarro, Chris Folsom and Mark DelMonte would join Marconi in double digits with 15, 14, and 11 points respectively.

The return off Matt DelMonte solidifies a team who has to get through the league’s lone unbeaten team if they wish to move on further. While their relief to have pulled off the nail-biter over the Temptations was apparent, Goon Squad remained aware of their true focus. Not satisfied with just this quarterfinal victory, they have their eyes set on their impending rematch with the reigning champions the Brotherhood.

“We’re just ready for the brotherhood,” Goon Squad’s Matt Marconi said. “Bring on the Brotherhood. We played them tight [last time], we got a full squad…This is what we wanted and we got it. It’s going to be a good game.”