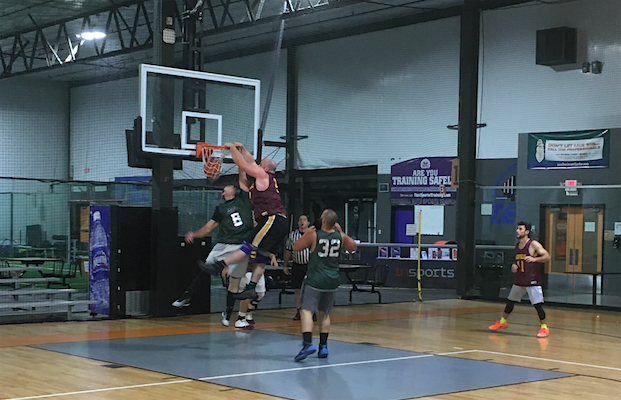 Week two’s match up of The Kekambas and the Goon Squad would hardly be considered an offensive showcase. While both teams struggled to put the basketball into the hoop, an essential part of winning any basketball game, Goon Squad was able to orchestrate a fourth quarter run, topped with highlight dunk after highlight dunk, to put the finishing touches on the Kekambas, 65-42.

An often sloppy performance by both teams, the first half provided little to cheer about. The sloppiness would not be in turnovers, as both teams managed to secure the ball well, but it would be in how both teams seemed intent on trading empty possession for empty possession. Shots refused to fall on either side and the low scoring affair went into the break with a score of 32-19 in favor of the Goon Squad.

The “score more points” part of The Kekambas’ second half prophecy seemed to come true in the third quarter, as they whittled the Goon Squad lead down to just five. That said, the “hold ’em to less points” part of the prophecy didn’t quite hold true. Despite a push in the third quarter, the Kekambas simply ran out of steam in the fourth, and ended the night shooting an abysmal 30 percent from the field as a team.

Now I don’t know exactly what happened in the fourth quarter for the Goon Squad, whether they found the shoes Lil Bow Wow did in Like Mike, got a sip of Michael’s Secret Stuff – have to throw in a Space Jam reference for the 90’s kids – or just simply started to gel as a unit, but they came out firing in the final period.

After putting up just seven points in the third quarter and looking very sluggish after the break, The Goon Squad’s second wind propelled them to a 26-point fourth quarter, capped with a number of impressive dunks and alley-oops.

“We let the intensity dip a bit, and we knew we had to come back out and make a statement,” Goon Squad’s Brandon Massaro said.

The exclamation point for the night would come at the hands of, well actually the left hand, of the Goon Squad’s Matt Delmonte, whose ferocious one-handed put-back slam with 25 seconds left would put his team up by 21.

Matt Marconi contributed as well, scoring 20 or more points for the second straight week, while also hauling in six rebounds. While they were able to come out on top, the Goon Squad must look to improve on their 47 percent field goal shooting as a team next week against a strong No Limit team.

The Kekambas have a promising matchup next week going against a struggling Air Ballers team. They will strive to build off of the positives from this week, like Tyler Russell’s double-double (11 points, ten rebounds). Hopefully next week will prove to be more prophetic for Hattani and the Kekambas.