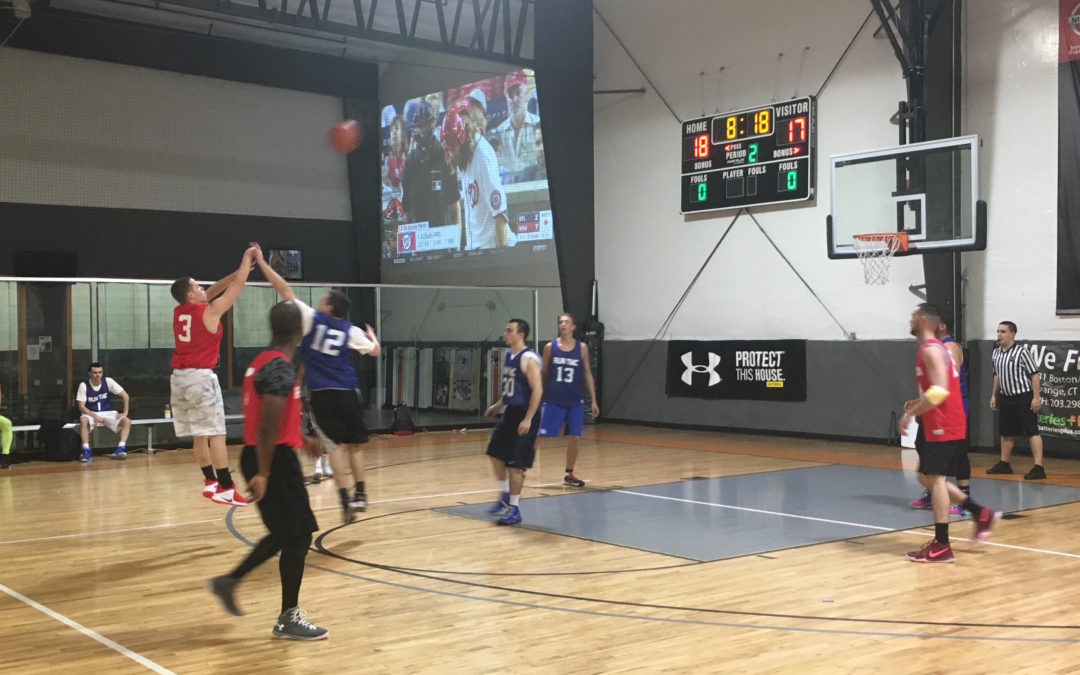 Jalen Graham and Scott Corchard combined for 48 points in Red-Emption’s 73-65 nail-biting semifinal win over Run TMC to advance to the Winter 17 Finals. The contest was a back-and-forth battle from start to finish, as both teams saw multiple lead changes occur throughout the game. Red-emption would ultimately pull away with the win after outscoring Run TMC 21-14 in the fourth quarter.

“It was a tough game,” Red-emption’s Scott Corchard said. “They definitely gave us a run. They played tough and hit shots. We turned the ball over a little bit, but in the end we buckled down and started pressuring the ball, which is what we needed to do to come out with the win.”

Run TMC’s Will Hudson would come out of the gate attacking the basket as he would score the first five points for his team, but the game would be tied at 15 a piece at the end of the first quarter.

The second quarter would continue to be a game of who could hit shots from the perimeter, while also dominating in the paint. Following a clutch three by Matt Mazzochi with time winding down, Run TMC would head into the half with a 33-30 lead over Red-emption.

Legacy Leagues Winter 17 MVP, Jalen Graham, would lead his team scoring 11 points and grabbing six rebounds at the half. Run TMC’s Will Hudson had a game-high 12 points at the half.

“We started pressuring to come out in the second half, but more so in the fourth quarter,” Corchard said. “I think that’s essentially what put us over the top. We forced some turnovers to start the second half and we kind of just kept that roll.”

Jalen Graham and Red-emption would bring the heat as the team continued to pressure the ball full court. Run TMC continued to find ways to break the press, as Kevin Blake and Brad Seaman continued to score in the paint.

Graham would hit the dagger, a three-pointer that would give Red-emption a 68-65 lead with just under a minute remaining. Scott Corchard would go to the line and give the team a four-point lead on the following possession.

Following two clutch free throws and a windmill dunk by Graham, Red-emption was able to secure the eight-point win. Graham would finish with a game-high 32 points and nine rebounds, and will be the center of focus in the upcoming Finals matchup.

“[Jalen] can put up 30 in any game, Corchard said. “We know how it is. Every team needs someone like that.”

When asked about the potential matchup of facing either the Monstars or Cereal Killers, Scott Corchard seemed to have plenty of confidence in his team.