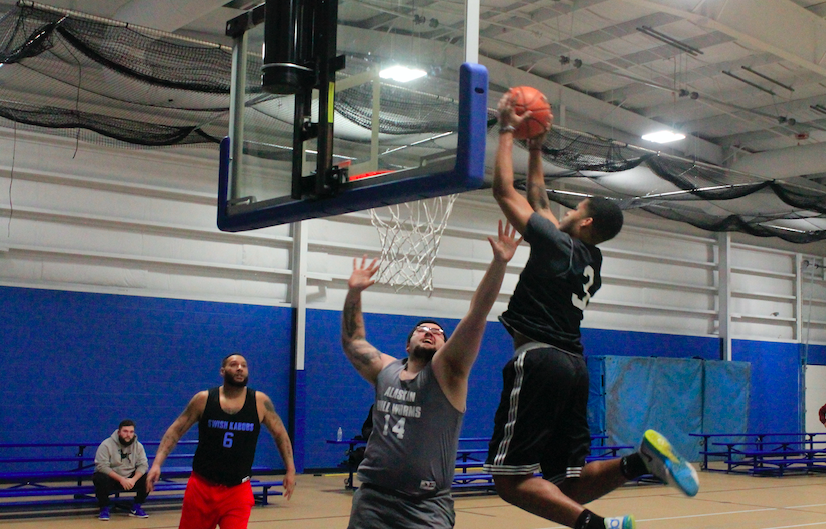 On a freezing night outside, things were heating up inside, as the undefeated Swish Kabobs continue their hot start as they defeat the Alaskan Bull Worms by the final of, 83-60.

The Swish Kabobs found scoring up and down their lineup as four of their seven players ended the night in double figures. For Greg Bell, he led the way with 21 points on 10-of-15 shooting, just missing a double-double as he also recorded nine rebounds to go along.

The Swish Kabobs jumped out to an early three-point lead at the end of the first quarter and never looked back. They outscored the Alaskan Bull Worms 65-39 over the following three quarters to secure a 23-point rout.

“Hustling and pushing the floor, not settling for jump shots,” Swish Kabob Taylor Myers said after the game. “We had a lot of dunks and layups, that was the key to getting ahead in the second half.”

Meyers practiced his preaching as he finished the night with 14 points on seven of nine shooting, attempting only a single three-pointer that he missed, as well as accounting for five rebounds of his own.

For the Alaskan Bull Worms, they drop to 1-4 on the season with this latest loss, as well as dropping their last four games after an opening night victory over the Pizza Rolls. The Alaskan Bull Worms have averaged a very lowly 52.8 points per game over this losing stretch, and in a league that is focused around high flying offense and flashy plays, ineptitude on offense puts teams at a severe disadvantage.

Nate McShane was the one trick pony for the Bull Worms as he finished the night with 29 points on 12-of-30 shooting. Yes thats right, 12-of-30 from the field. That doesn’t account for the seven three-pointers he attempted as well, in which he hit just one. McShane added six rebounds and a block to his credit as he was the only Bull Worm to score in double figures.

Brandon and Ryan Arruda were both perfect from the floor tonight for the Bull Worms. Brandon ended with nine points on 4-4 shooting, along with a perfect one for one from beyond the arc. Ryan as well was one of one from three, only he finished with five points on 2-2 shooting.