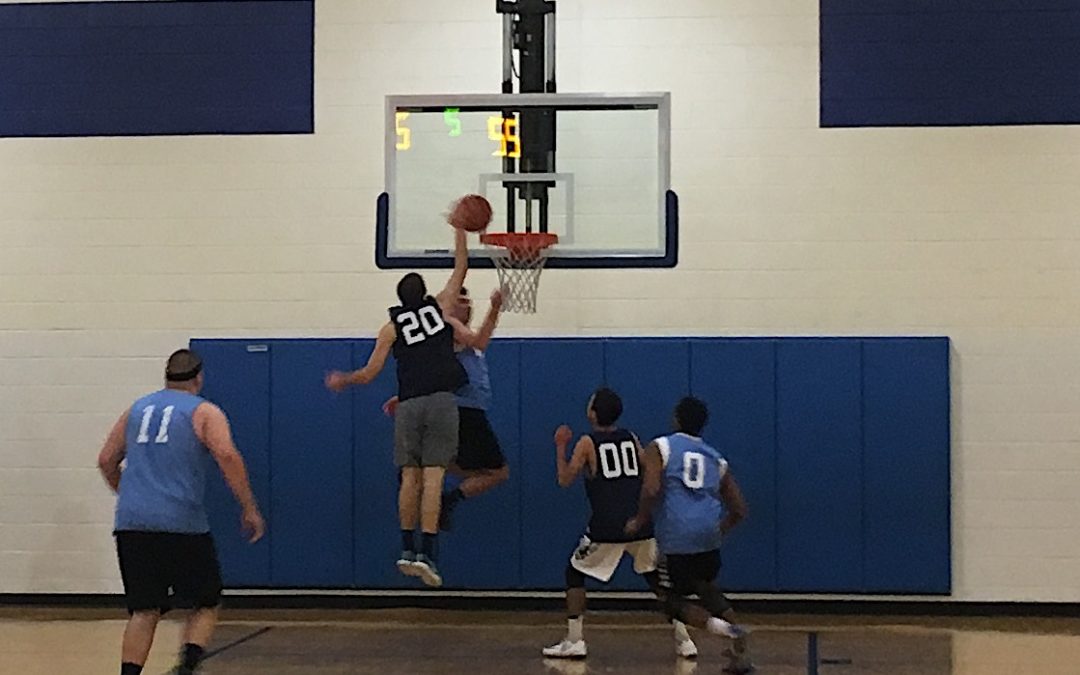 The fifth-seeded Skyhookers faced off against the fourth-seeded Werewolves in the Quarterfinals Wednesday night in what would turn out to be an instant classic. Gino Forte stood at half court in a tie ball game, while the clock began to tick under twenty seconds left in regulation. Forte took a deep breathe, and took off. He faked left and drove right, and found Brad Allen in the post. Allen shimmied and took a fading midrange shot that fell just short as time expired.

To overtime we went.

Once again Forte found himself with a chance to send his team to the next round near the end of overtime. However this time, he decided he could do it all himself. Forte drove from the right wing and pump faked from about 15 feet. His defender jumped out of the way, and Forte spun the opposite way into a wide open jump shot that he nailed to put his team ahead for good. The Werewolves escaped in overtime with a win 71-68.

Forte finished with a team-high 26 points and five rebounds, and only had one thing on his mind after the game.

“The Alliance,” Forte said. “(Thats the) only thing going through my mind right now.”

The Werewolves know they have the ultimate test coming up next week against a heavily-favored top-seeded Alliance team, and according to Forte, are already game planning for said match up. They collectively understand this will be the biggest game of their season.

“The Alliance distributes the ball very well,” Forte said. “They move, and they play defense. We don’t know if we’re going to come out in a man or a zone yet. What we do know is that we’ve got to contest shots and we cant leave our feet.”

The Werewolves decided to play a triangle and one for most of the game, allowing Brian Heston to shadow the Offensive Player of the Year Brendan O’Donnell. More towards the end of the game when it came down to the wire, the Werewolves switched to an all-out man defense. Heston did a good job containing O’Donnell, who scored 25 points which is just below his season average (30.8).

The second half was all about defense. The Skyhookers came out of the second half red-hot on both sides of the floor. They stepped up their defensive pressure and their hustle, making every shot the Werewolves put up a difficult one. They also forced turnovers with their improved man defense. The Skyhookers definitely owned the third quarter, outscoring the Werewolves 14-4, and put themselves in a great position to win the game.

Ultimately, the Werewolves just made a few more key plays down the stretch and were able to hold off the Skyhookers. The Werewolves advance to take on The Alliance, a team who has yet to discover the meaning of the word “lose.” The Alliance took both regular season matchups against the Werewolves handedly, winning both by at least 43 points.