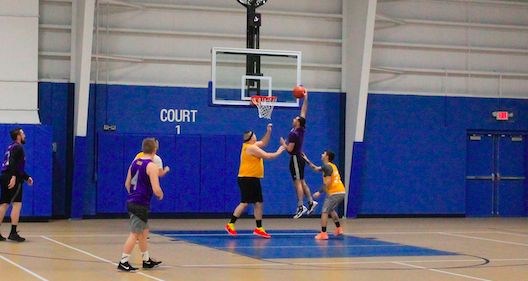 There are some nights you just don’t miss. The Skyhookers caught the Halfway Crooks on one of their nights, falling behind 26 at the half and eventually dropping their second straight game, 121-81.

Joey Zocco led a Halfway Crooks offensive attack that just didn’t let up. Besides his 28 points and 8-of-13 shooting from deep, two other players finished with over 20 points, as well as another two in double figures. In fact, everyone on the Halfway Crooks scored at least seven points tonight. The ball spread like cream cheese on a bagel, as the team finished with 28 assists on 52 made baskets.

“We got to the lane well, and that lead to open threes. [Zocco] better make them,” Jared Hanson said.

Zocco caught fire from deep early in his second consecutive 20-point outing, as he led his team on one of their greatest scoring nights ever. Dylan Lincoln added 26 points on 78.6 percent shooting, with four triples of his own, and added 10 rebounds to go along with it. Brett Cody stepped up huge, as well, with 25 points on 70.6 percent shooting. Mike Wilbur and Jared Hanson each added 16 and 10, respectively, and both at a very efficient rate.

“It helped getting clean rebounds on defense,” Hanson said. “We got some easy buckets in transition. Easy points lead to better defense, and all of a sudden you’re up 20.”

As a team, the Halfway Crooks connected on 62.7 percent of their shots, missing just 31 of the 83 they took. Of those 21 misses, they were able to grab eight offensive boards — nearly one third. They out-rebounded the Skyhookers 47-25, who were missing two key big-men in Chase and Zach Almond.

Despite the two of them arriving late, both Brendan O’Donnell and Zach Charette led their team in scoring upon arrival. O’Donnell had an impressive 26, while Charette added 20 of his own. Nolan Dubois and Kevin Redman contributed with 13 and 12, respectively.

The Halfway Crooks continued to improve on their spectacular season, with their one loss coming to Lob City. Zocco’s emergence adds a needed weapon along the three-point line, which has complimented their inside game very well. Zocco and Lincoln were the two highest scorers in the last game, as well, as the three-point shot has really opened up their inside game.

They look to continue their winning ways against the Werewolves next week, as the Skyhookers look to rebound against the Boston Blazers. Should the Halfway Crooks win out, they will earn the second seed, matching them up with one of the bottom four teams in the league.