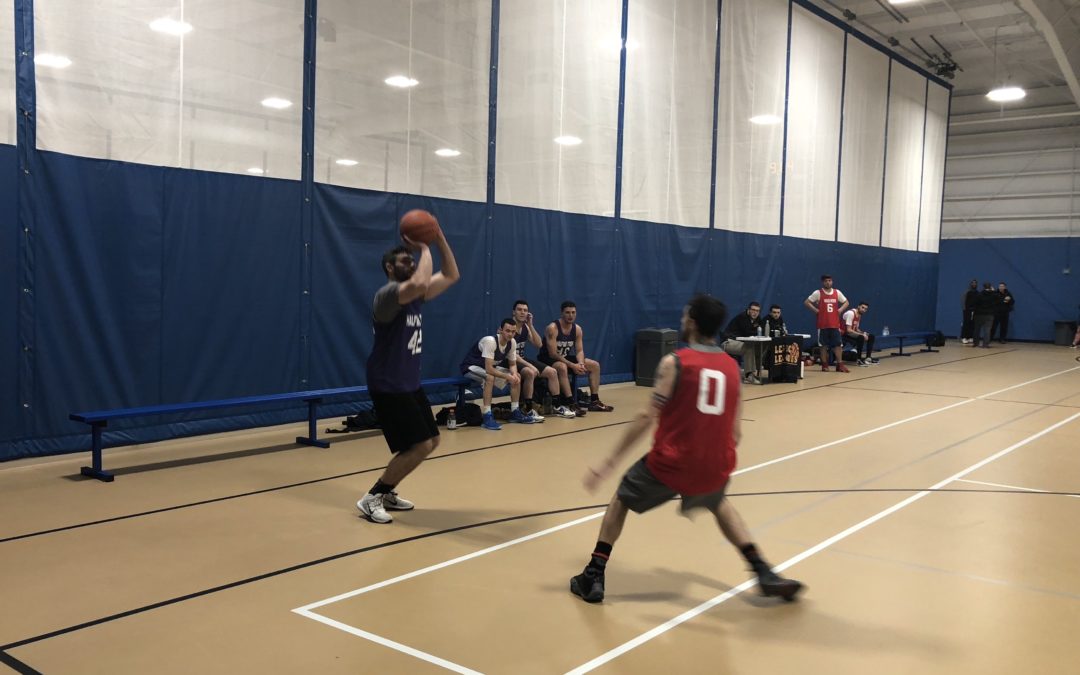 With two games left in the regular season, the Halfway Crooks used back-to-back wins to swipe the No. 6 seed after defeating the Wild Hogs Thursday night—the team’s second win in as many nights.  The Halfway Crooks (3-5) used a dominant second quarter to secure a halftime lead they wouldn’t relinquish en route to a 61-55 victory, heading into the postseason with three wins in their last four contests.

“The last couple of games we’ve had everyone here, with the exception of maybe one,” Halfway Crooks’ Justin Kolenda said. “It seems like we’re finding our way around here, making sure we have the right lineups.”

Kolenda showcased multiple abilities in the season finale, scoring eight points on 50 percent shooting with eight rebounds, five assists and three steals. While he did a little bit of everything to help his team toward a win, it was Tom Ferranti and Dylan Lincoln who carried the weight offensively. The duo scored more than half of the team’s points, scoring 17 and 16 points, respectively.

Lincoln, coming off a team-high 18 points the night before, continued to be a consistent piece of the Halfway Crooks offense. He, Ferranti, Kolenda and Jared Hanson are all now averaging double-digit points heading into the First Round against Prestige Worldwide. While their playoff opponent is 6-2 and already has a 17-point win earlier this season against them, the Halfway Crooks are clicking at the right time.

“It’s been good so far,” Kolenda said. “So hopefully we can keep this going into the playoffs now.”

The Halfway Crooks held the Wild Hogs to just 10 points in the second quarter, extending their lead to 11 by the halftime break. Slowing down in the third and fourth quarters, the Halfway Crooks allowed the Wild Hogs (2-6) to cut their lead to just five with several minutes left in regulation. Mike Bandieri, leading the Wild Hogs’ second-half surge, scored a game-high 31 points with seven rebounds, five assists and three steals. Averaging 17.7 points per game, Bandieri nearly doubled that to narrow his team’s fourth-quarter deficit.

In the end, though, the Halfway Crooks were able to main a two-plus possession lead in the dying moments of the game, helping secure the No. 6 seed after a disastrous 0-4 start to the season. If not for a tiebreaker, the Halfway Crooks could’ve been one place higher, but are content with their strong finish in the last few weeks.

“We’ll take the six [seed],” Kolenda said. “We’ll take down the first team that we face and get into the second round hopefully.”