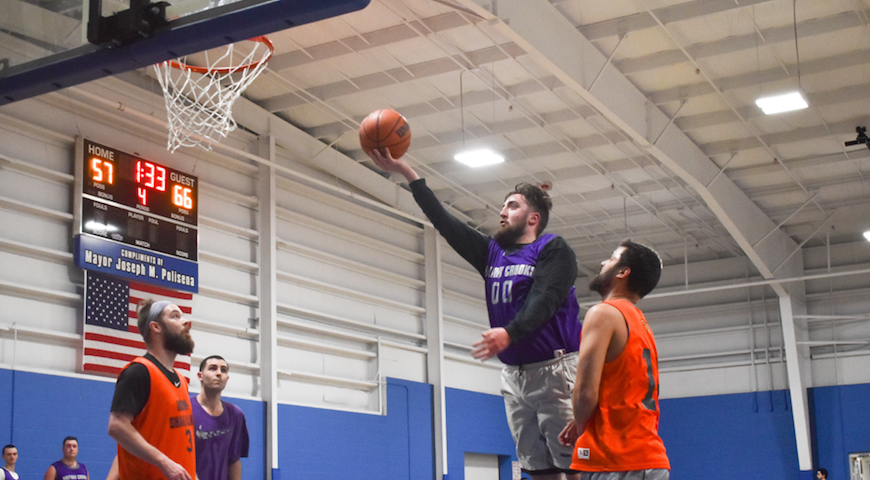 After a close loss to the reigning champs, the Halfway Crooks were able to pull away from Boom-Shakalaka in the second half and win by a final of 72-59.

The Commish, Joey Zocco, led the way for his Halfway Crooks posting 21 points, which all came from behind the arc, to go along with 11 rebounds. Boom-Shakalaka’s Jeremy DiMicco put up 16 points to go along with 15 rebounds but it wasn’t enough.

The Halfway Crooks came out firing the first two minutes holding an early 9-4 lead, but they went scoreless for the remainder of the first quarter as shots were just unable to fall. Boom-Shakalaka finished the quarter on a 13-0 run and held an eight point lead. That eight point deficit carried into the halftime for the Halfway Crooks.

Zocco talked about what they did differently in the second half to flip the script.

“I think we were taking better shots… Not just taking the first shot but getting a better shot, making that extra pass and then getting some offensive rebounds,” Zocco said.

After being down 34-26 at half, it was Dylan Lincoln who came out hot to start the third quarter as he hit back-to-back three’s to go along with a tough finish inside to cut the lead to one.

In the fourth quarter Zocco continued to light it up to hit a few big threes to seal the victory for the Halfway Crooks.

Both teams struggled to shoot the ball tonight as they were both under 38 percent from the field. However the difference in the game was the three ball. Boom-Shakalaka is typically a very good long range shooting team, but they were only able to notch five three pointers shooting at 16 percent compared to the Halfway Crooks 11 makes on 42 attempts.

It was good, triumphant win for the Halfway Crooks, but I wouldn’t expect Boom to have many more shooting nights like this going forward. They did an excellent job in the first half of playing at their pace and shots just weren’t able to fall down the stretch.

\They will look to bounce back next week against Dujes Boys and the Halfway Crooks will look to make it two in a row against the Skyhookers.