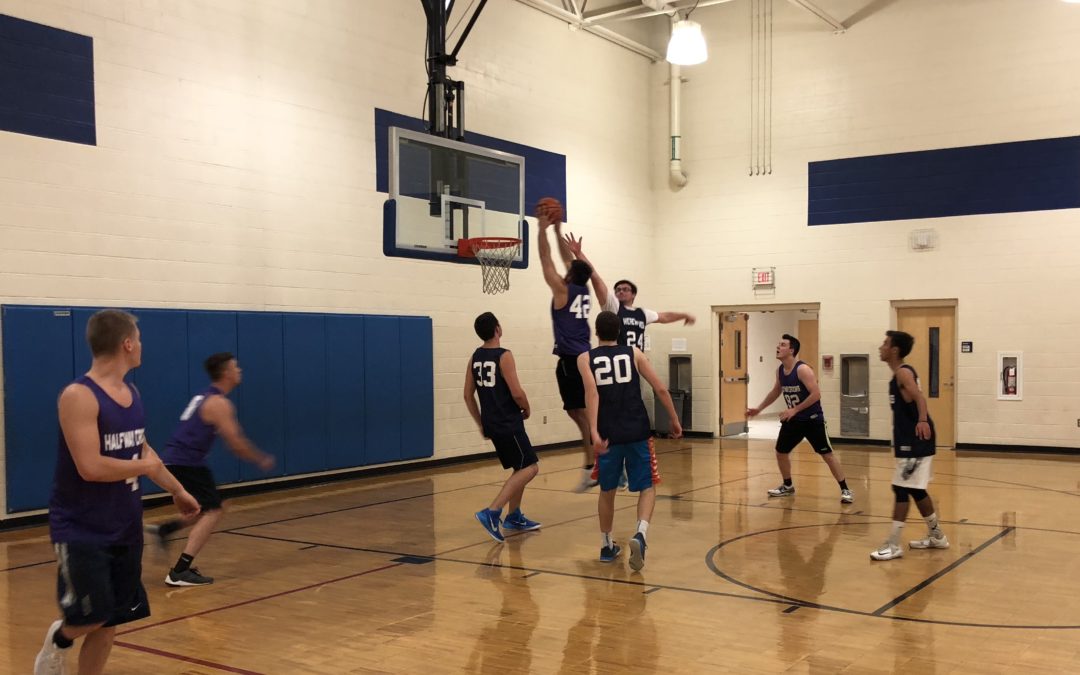 “It all starts on defense,” the Halfway Crooks’ Jared Hanson said proudly after his team’s Week 4 game. The Halfway Crooks came out of halftime down, but they were certainly not out, and after a string of timely buckets found themselves in control of a 10-point lead. Multiple late free throw attempts sealed the deal as the Halfway Crooks narrowly edged-out the Werewolves, 58-50.

Tom Ferranti led the team in scoring with 20 points, and he also chipped in 13 rebounds. He proved to be a cornerstone for the offense all night, as he worked the Werewolves both inside and out, connecting on four of his attempted eight three-pointers. Hanson continued his solid play, adding 13 points and five assists, but maybe his biggest contributions come as the floor leader, always making sure his team is communicating.

Brian Heston and Gino Forte both finished the night with 16 points each for the Werewolves in the loss. Heston also had 17 rebounds, which was more than half of his teams total. Ultimately, this was not enough as the Halfway Crooks made a few more plays down the stretch in order to keep the Werewolves at bay. Poor ball movement proved to be a factor in the loss for the Werewolves, as the team only totaled seven assists all game.

The main factor in Wednesday night’s victory for the Halfway Crooks were their timely buckets in the final minutes. They absolutely locked in defensively down the stretch, and were highly-active making an effort to steal or deflect every pass. They smothered their opponent for most of the game, and did not allow any open or easy buckets.

“We did a great job playing defense and shutting down the perimeter,” Jack Duff said after the game.

Duff could not be more right as the Halfway Crooks did not allow anyone to eclipse the 20-point mark. The Halfway Crooks also held the Werewolves to an abysmal 33 percent shooting, which would make it tough for any team to come out victorious. Each team had a record of 2-1 entering their Week 4 matchup. This win moves the Halfway Crooks to 3-1, while the Werwolves fall to 2-2.

Looking ahead next week, the Halfway Crooks will be matched up with an undefeated Alliance team, which should serve as the toughest test yet. Hanson had two words when asked how his team plans on trying to slow down The Alliance.