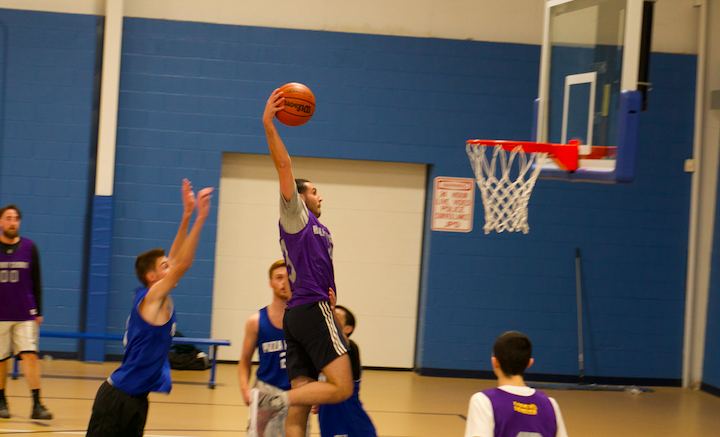 The Halfway Crooks put on an offensive clinic on Wednesday, as five of their seven players reached double figures en route to a 90-50 win over the Pizza Rolls.

“The pace picked up,” Joey Zocco said. “Adding Brett, and getting some of these other guys back (was huge). When Brett is leaking out like that, it’s easy buckets. We were always trying to run, but now to have that player that wants to run is going to make the rest of us run.”

The first half explosion was something past Halfway Crooks teams would dream of. Dylan Lincoln and Jon Slein led the way with 17 and 16 points, respectively. Collectively, those two shot 15-for-25, with a majority of their makes coming in the paint. Lincoln finished with a double-double, pulling down 12 rebounds, as well.

While Lincoln and Slein commanded the inside, Cody and Jared Hanson were able to add a dominant back court to the Halfway Crooks’ attack. Hanson added 13 points to go along with Cody’s 15, and the two complimented the big men beautifully. Mike Wilbur also added 12 points of his own.

Rocco Lombardi shined on a rough night for the Pizza Rolls, with a game-high 21 points on 58.8 percent shooting. They’ll search for their first win next week when they take on the Skyhookers, who found their first victory in Week 2.

The Halfway Crooks will hope to stay hot next week, going up against the winless Duje’s Boys.

“We need to keep playing defense,” Zocco said. “That’ll lead to easy offense and leak-outs.We got some dunks this week, so that was fun.”