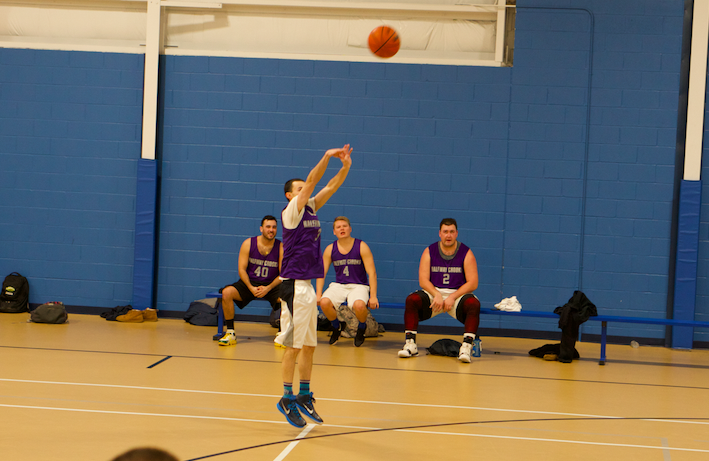 The Halfway Crooks got to 3-0 after a big 85-58 win over the Alaskan Bull Worms. The Halfway Crooks had a balanced attack with five players scoring in double figures and they controlled the game from start to finish.

Jared Hanson and Dylan Lincoln both had monster performances in Week 4 for the Halfway Crooks. Hanson led the way scoring wise with 22 points and Lincoln was dominant with 21 points and 15 rebounds. The Halfway Crooks were missing one of their best offensive players in Brett Cody tonight but it did not slow them down at all.

“Not having Brett Cody for the first time this season was interesting,” Joey Zocco said. “He is a big part of our team, so for us to play the way we did was nice to see.”

The Alaskan Bull Worms fall to 1-3 and really shot the ball poorly throughout the game. They ended up shooting 31 percent from the field and 32 percent from three point range. Justin Simmons and Evan Mase each scored in double figures, but it was not enough to get the win. They both hit four threes each but they did not have much help.

The Alaskan Bull Worms (1-3) will try to get back on track next week as they take on the Swish Kabobs (3-0).

The Halfway Crooks have a big test next week as they take on the defending champion Lob City (4-0) in a matchup of two undefeated teams. “Next week is going to be a good test for us as a team,” Joey Zocco said. “Lob City is obviously a very good team, so to be the best we have to beat the best and that’s no easy task. Next week will tell us a lot about our team this season.”