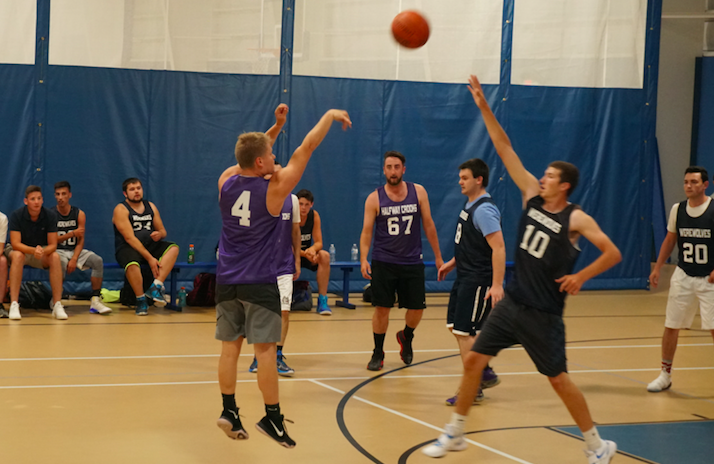 “The Werewolves, man, it’s always fun,” Joey Zocco said after the game. “We were up like 20, and even going into the fourth we were like, ‘We know it’s not close to over.'”

Jared Hanson scored a game-high 31 points and was lights out, shooting 5-of-6 from deep and 64.3 percent overall. Heading into the game, Hanson was averaging only 13.5 points a game, less than half of what he had Thursday.

Eight of his 31 were from the charity stripe, and the Halfway Crooks relied on the free-throw line for 16 points on 26 attempts. In comparison, the Werewolves shot two free throws and missed the both of them.

The offense stayed on throughout the night, and they had built up a 19-point lead heading into the fourth quarter. They were playing to grow the lead, rather than to keep the lead, and it paid off later in the game.

“A lot of times your tendency is to slow it up, and try to burn that clock because you have a lead,” Zocco said. “If you keep attacking you actually grow the lead. Against a team like that [Brian] Heston and Gino [Forte] could get hot, and hit a couple threes and then it’s just a nine-point game.”

It was ice cold offense and fouls that killed the Werewolves Thursday night. After coming out of the gates for 24 in the first quarter, they scored 14 combined-points in the middle frames. They committed 22 personal fouls, and it definitely mattered. Had it not been for free-throws, the Halfway Crooks would have lost by two.

The Werewolves started hot in the fourth, and it almost looked like another thriller in the making, but it was too little, too late at that point. Brian Heston led the way with 25 points and 10 boards, followed by Gino Forte with 18 points of his own.

Besides those two, the other six players who saw the floor combined for 13 points on 37.5 percent shooting. The team as a whole shot poorly. The Werewolves did win the rebound battle, and only committed eight turnovers and had seven steals.

“You always want to win more than you lose,” Zocco said. “Getting that momentum heading into the playoffs is super important.”

The Werewolves now stand at 4-3, with the Wild Hogs and Boom-Shakalaka remaining on their schedule. Assuming they split, they would be in the same boat as the Halfway Crooks, and the two could potentially see each other again in the first round of the Summer 18 Playoffs.

Anything can happen in the playoffs, so stringing some wins together to end the season is key for every team who hopes to make a run,” Zocco said.