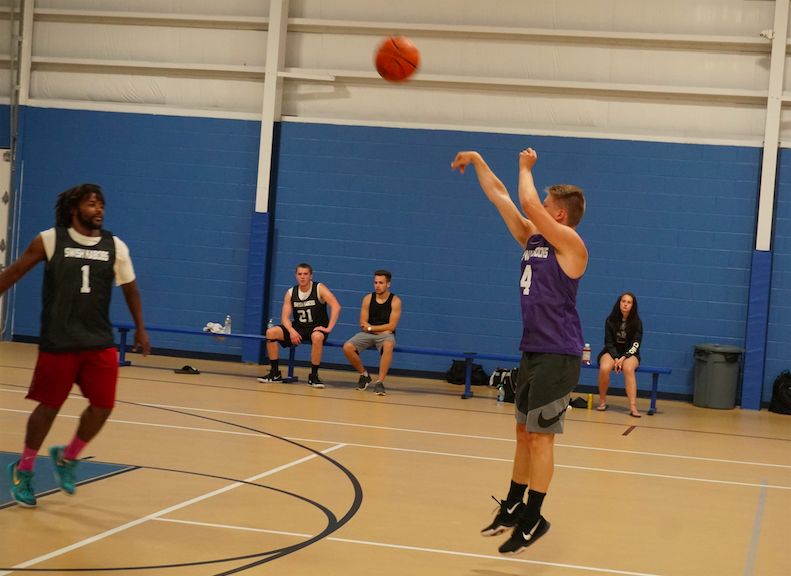 Jared Hanson went to the free throw line with 0.1 seconds left in the game and his team behind by two. Miss a shot, and his team would go home for the season while watching the Swish Kabobs play in the Semifinals.

Instead, he sunk both, tying the game at 50 and sending it into overtime. Hanson then nailed a three in the extra period, the first and only field goal that the Halfway Crooks needed to seal a 54-52 victory.

With time ticking down, Hanson crossed over at the elbow and drove into the lane, drawing contact as he went up for the game-tying bucket and earning a trip to the foul line.

“There was still time left for a tip, maybe,” Hanson said about the final possession of regulation. “We haven’t been shooting very well as a team, so I figured the best shot’s at the rim.”

Both offenses started off pretty stagnant, as the teams were tied 8-8 after the first quarter. At the half, the Swish Kabobs had a three-point lead, 25-22.

Not only were the offenses struggling, but the defenses for both sides were working harder than normal on Tuesday night. Hanson led his team with 18 points, and no one else made too much of a difference on the offensive side of the ball. Mike Wilbur added 11 points, and John Slein contributed with 14 and 12 boards as well.

“The biggest thing was we started to rebound the ball on defense,” Hanson said after the game. “We shot the ball poorly, so our defense really helped. We need to keep playing defense, because the teams that win are only going to shoot better.”

The effort that the Halfway Crooks dedicated to rebounding and free throws paid off as well. They outrebounded their opponents by seven, and were able to sink 13 of their 16 free throw attempts.

“Upset?!” Hanson asked. “Look at the scores: we lost to them by three, by two. We’re pretty even. It’s a tough matchup for us because some of us are undersized, but rebounding the ball helps.”

For the Swish Kabobs, Randy Butler and Greg Bell were the only double-digit scorers, with 18 and 14, respectively. Butler added 12 boards and three assists on the night, but was unable to connect on any of his three-point attempts.

Once again, the Swish Kabobs suffered from a short bench, as Tezhan Massey and Marquis Jones were absent from Tuesday’s contest.