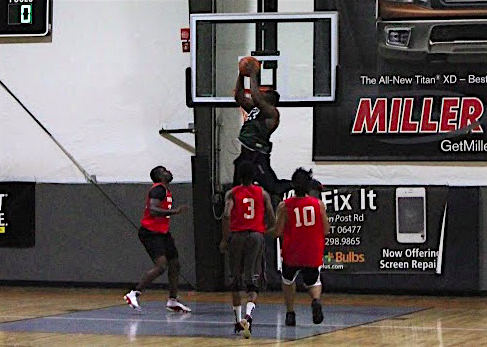 Mark Harrison played in eight of nine regular season games for ZewCrew with a lone absence against the Pandas in Week 7. On Tuesday night, the Pandas got their first look at the Legacy Leagues All-Second Team selection and Harrison made it the last thing they would see this season.

Harrison finished with 20 points, 6 rebounds and 4 assists as No. 5-seed ZewCrew defeated the No. 4-seed Pandas, 62-56, to advance to the league semifinals.

“We knew when Mark didn’t play in the first game it was a big difference,” ZewCrew’s James Davis said. “You saw what he could do. Rebounds, points, they couldn’t stop him down there. So we just fed him, everyone else contributed and you see what happened.”

ZewCrew pulled out to an 11-0 lead over an undermanned Pandas squad in the first four minutes of the contest. However, once Chris Dias and Dre Joyner arrived, the Pandas shifted the first half momentum.

“We just got into our rhythm, started running and started playing better defense,” the Pandas’ Jelan Mason, who led all scorers with 21 points, said. “We kind of got the matchups right.”

The Pandas dominated the second quarter, outscoring ZewCrew 23-9. Despite a six-point deficit going into the break, Davis says his team was still focused.

“I just told my team at halftime that we just have to lock in and stay focused in the second half of the game and take the lead back,” Davis said.

ZewCrew tied the game up at 34 less than three minutes into the quarter after consecutive buckets by Harrison, who shot 9 for 14 from the field. ZewCrew continued its third quarter surge from there and took a 39-36 lead into the fourth quarter.

ZewCrew started off the fourth with a dunk, but the Pandas rattled off consecutive field goals to make it a 41-40 game. A back-and-forth contest ensued for the next five minutes, with the Pandas’ Jhemerson Dias knotting the game at 49 with a little over four to go.

With the season on the line, Harrison and company asserted themselves, throwing down monster slams to seal the deal and close out the six-point quarterfinal win.

No. 5-seed ZewCrew advances to face the undefeated, top-seeded Brotherhood on Thursday night. The Brotherhood won the previous matchup, 78-65, in Week 8, the smallest margin of victory of its ten games thus far.

Since that matchup, ZewCrew has beaten the No. 2 and No. 4 seeds, respectively, and Davis believes his team is reaching its peak.

“I would definitely say we’re playing our best basketball right now as a team,” Davis said. “Everything is clicking. We’re all gelling.”