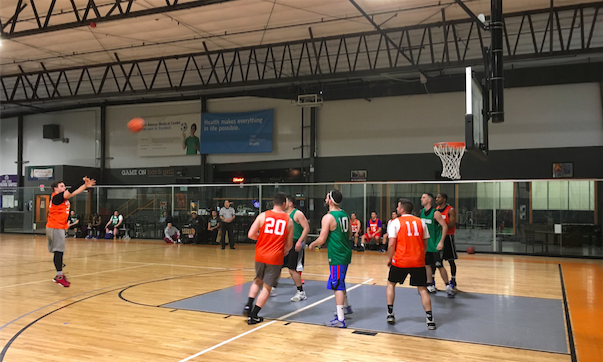 Coming into this “make-up” Week 10, Sportslook, a perennial title contender and normally high playoff seed, had just one win.

Now, after playing perhaps their best game of the season, led by the return of star Tyrell Holmes, they picked up their second win defeating Stranger Danger, 78-45.

“We shared the ball, made some shots, got out in transition, played some good defense, and did what we had to do,” Sportslook’s Steve Niggbrugge said.

In addition to the consistency on both ends, Sportslook found a way to close the game out in the fourth quarter, a task that had troubled them in the past.

“Once we got a lead we didn’t give it up,” Niggebrugge said. “They got close, they hit a couple threes, but we locked down on defense and took tough shots and made them.”

With offensive and defensive consistency and a strong finish, all Sportslook needed to do in between was follow Tyrell Holmes. Holmes led the way with 20 points and was hounding ball-handlers all night leading to five steals.

Despite the loss Stranger Danger’s Steve Echols helped his personal case for an all-star bid with 14 points and 12 rebounds.

After the win, Sportslook seemed to be gaining confidence and figuring out their team chemistry at the right time.

“We’re fortunate we have a deep team, we go two squads with some pretty good athleticism,” Niggebrugge said. “As long as we have subs we’ll rotate in and out, keep fresh legs and hopefully carry that on into the next one.