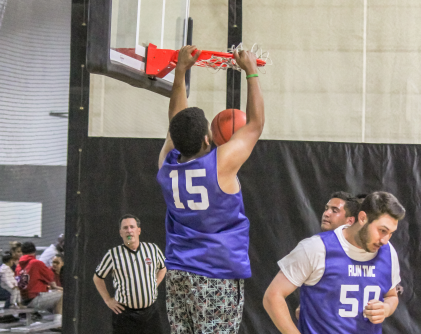 Will Hudson was the story of Monday Night’s contest as Run TMC put a beating on short handed Dinners Served with a 114-45 win.

Run TMC started strong and never looked back from there as they put on a highlight reel performance.

Hudson came into the night with only 12 points in Week 1 but burst out on to the scene with 39 points in Monday night’s victory. He ended with eight made three-pointers and shot 54 percent on the night. Hudson made a free throw with several minutes left to get to 39 points, and 1,000 career points in his Legacy Leagues career.

“I’m the third person to do it, I’m behind Mike and Carmine so that’s good company to be in,” Hudson said.

Run TMC got contributions from everyone as Reggie Stewart quietly collected a triple-double with 21 points, 11 assists, and nine rebounds. New team member Kayjuan Bynum added 13 points and Joey Zocco poured in 12 points one four three-pointers. Run TMC scored the majority of their buckets in transition from dunks and from behind the three point line as they made 14 threes.

“It’s a long season. Teams like Moose and Shocker City we are going to have to play that way against them,” Hudson said.

Matt Terrasi was the only high point for Dinners Served with 20 points and seven rebounds as they looked outmatched all game.

Run TMC looks to go 3-0 and continue their dominance against Nothing Easy in Week 3. Dinners Served looks to get their first win against Above the Rim, who is currently 0-2.