Inside the Rivalry: No Limit vs Run TMC 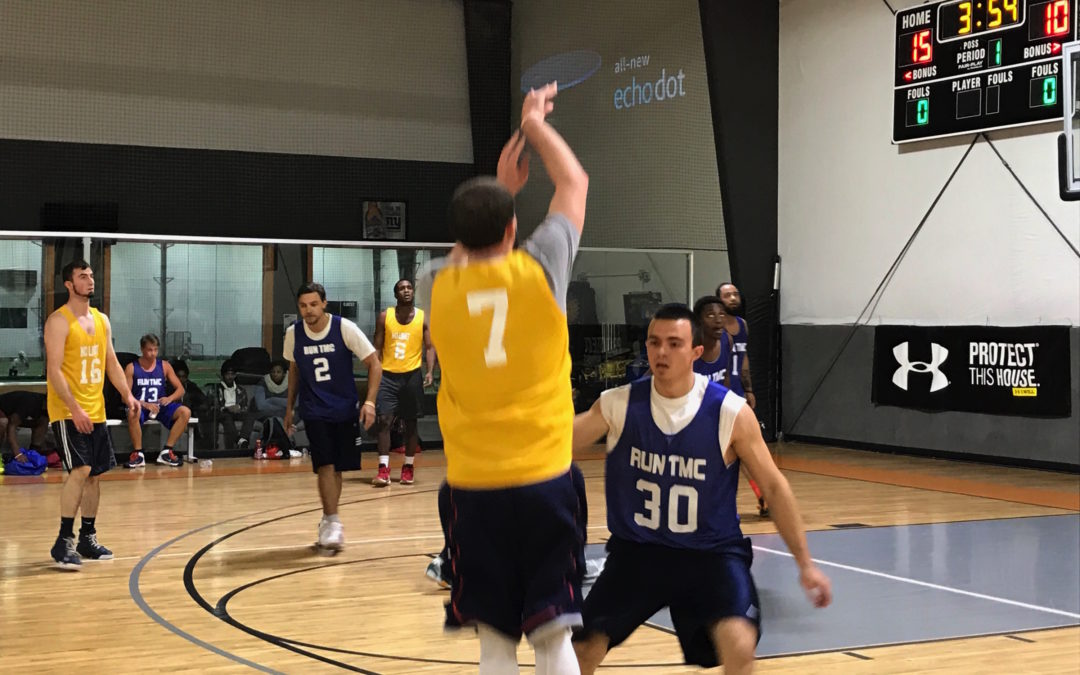 Unfortunately, another great season of Legacy Leagues basketball action has come to a close. However, there is no real offseason when it comes to this league.

Teams are always trying to get better with offseason roster moves, and in the process some feathers can be ruffled. This offseason sees this in full force, as the heated rivalry between perennial title contenders No Limit and Run TMC just gained a little more juice.

Star guard John Rullan, after two strong seasons with No Limit, will be transitioning to his new squad, Run TMC, in about a month when the Summer 17 season kicks off.

“[The switch] was to change things up a little bit, and play with different players.” John Rullan said. “Actually, I play against Howie [Miller] and Tarell [Vargas], rather than playing with them, all the time.”

Rullan, the two-time All-Star, Winter 17 All-Star Game MVP and former Three-Point Contest champion, is taking his talents to the arch-nemesis of Run TMC. As one might imagine, this has not sit well with his former teammates, specifically Ronte Byrd, who is never at a loss for words.

In addition to Byrd, Rullan leaves behind a team that only suffered one loss this winter, including former MVP Tarell Vargas and two-time All-Star Howie Miller. It seemed like No Limit had it all figured out with Vargas on the ball acting as a dribble-penetrator and distributor to Rullan and Miller in the half-court offense. On the other end, Rullan would be able to take gambles on steals and blocks with Vargas and Miller on the back end, rotating hard on defense.

No Limit also went undefeated before Run TMC upset them in the quarterfinals of the playoffs, avenging their loss to No Limit from the previous season in the Semifinals. These teams played in the regular season the past two seasons as well, most recently in the Winter 17 season, where No Limit needed overtime to hold off Run TMC.

The rivalry was one of the best on the court, featuring trash talk on both ends, closely contested finishes, and high stakes involved in most games. Additionally, the all-time series between the two franchises is even at 2-2. Now, the two teams have an off-the-court dispute, stemming directly from Rullan.

“We need to add more depth since Rullan left us,” Byrd said. “The TMC and No Limit game [next season] is going to be a can’t miss matchup.”

Looking ahead to next season, Rullan will have to transition to a new set of teammates and a new game strategy week in and week out. Playing alongside fellow-long range marksman Matt Zocco, and one of the league’s best offensive rebounders Will Hudson will certainly be different from playing with Vargas and Miller.

“I think we’ll all work just fine,” Rullan said. “Everyone thinks we’re going to go at it, but we’re all competitors. Our one down fall from No Limit was we’d play really well against the best teams, but never show up until we actually had to against the bad teams. I feel like with TMC they’re going to play hard no matter who it is.”

Rullan will provide more space for Hudson on the inside, and will take pressure off of Zocco in both handling the ball and spacing the floor. TMC should feature an offensive game plan that attacks defenses from long range, and then gets the ball inside to take advantage of their supreme floor-spacing.

In terms of aspirations for next season both Run TMC and No Limit should have them set fairly high. However, the return of the two-time champion and an all-time undefeated team in The Brotherhood will provide a tall task. Both teams, as well as some others returning in the league, have the fire power to take down Goliath.

“I think we could make a run for the championship with the people we have as of right now,” Rullan said, in regards to TMC’s chances next season.

If [everyone] buys in next season we could be scary,” Byrd said. “We just have to get it done; we have the talent, the speed, and the height, so there are no excuses.”

No Limit will need to add pieces around Vargas, Miller, and Byrd, who are all returning next season. However, there are rumors in the works of new additions that can help No Limit continue their domination in the league.

If this offseason is any indication, the animosity and intensity this rivalry created will carry over to the hardwood this summer. The schedule for the Summer season has yet to be released, but the Run TMC-No Limit matchup will be can’t miss action, and if the past is any indication, these two teams may meet for a second time in the playoffs when everything is truly on the line.