Jones, Singleton lead Rookies to quarterfinals after defeating The Firm 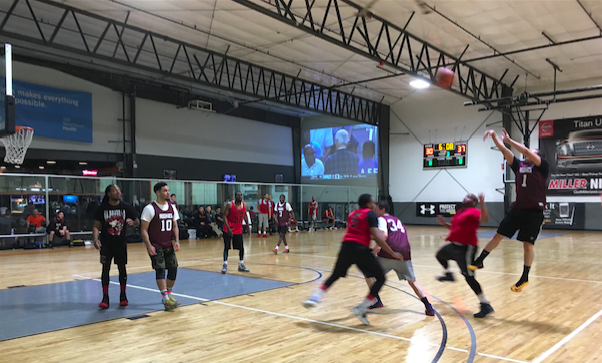 In the first upset of the Winter ’17 Legacy Leagues Playoffs, The Rookies late free-throw shooting and hard play allowed them to “survive and advance” past The Firm, 48-45.

“Just heart, heart really. We were missing two of our starters which was big, but we just played with heart,” The Rookies’ Eric Singleton said.

Singleton left it all out on the floor with 23 points on 50 percent shooting, while being a defensive pest with three steals.

Normally a reserve, Singleton was featured in the starting lineup tonight without the services of Winter ’16 all-star Jaylon Smalls. The move paid great dividends in the stat sheet and on the court as Singleton was the verbal leader and clutch shot-maker tonight.

“I come off the bench, the first time we played them I didn’t play and we only lost by nine,” Singleton said.  “If we had all of our starters we would have won by more.”

Their confidence was high, however, The Rookies may have got away with this win.  Singleton and Winter ’17 All-Star Jhamal Jones combined for 43 of their 48 points, showing their minimal depth throughout the game.

In addition to their minimal team performance, The Rookies also got help from The Firm themselves.  Once again, The Firm, instead of gaining chemistry as the season progressed were at odds with each other.  They were constantly fighting verbally on the court instead of being focused on the game.

This matchup was a rematch from earlier in the season where the Rookies took a loss. They were out for revenge the second time around.

“This time we had more time to prepare and knew what we were playing for,” Singleton said.