Joyner’s inspiring performance catapults The Pandas past And-1 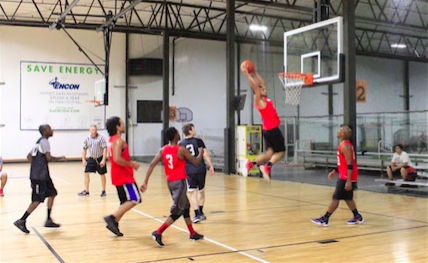 The Pandas put on an absolute clinic against And-1 Tuesday night, and Dre Joyner’s came to play. Joyner flirted with a triple-double, recording 18 points, eight rebounds, and eight assists, as his team handled And-1 for their fourth win on the season, 90-25.

It seemed as if Joyner’s motivation was driving him to elevate his game to new heights, as he looked like a totally different player. His flashy passing, three point stroke, mid-range game, and aggressive driving were all in full effect.

What was Joyner’s motivation? His friend, teammate and former leading scorer for The Pandas, Joe Spain.

“This was for my older brother man,” Joyner said. “He got into an accident and cannot play for the rest of the season, so you know we gotta fight for the rest of season, and finish this out for them.”

Behind Joyner, was Chris Dias who provided a huge spark, putting together 38 points, 12 rebounds, four assist and three steals. He constantly pushed the pace, and set the temple for his team.

Despite The Pandas losing a trio of their players that included, Spain, Rondell Jones, and Jelan Mason, they have managed to stay afloat with a 4-4 record, which is tied for 4th place in the standings, along with ZewCrew, and Wake & Blake. Joyner commented on what his team has to do in order to keep the ship sailing.

“Just keeping fighting, that’s it,” Joyner said. “Every game we gotta just keep going out and playing like it’s our last game.”

On the other hand, Tuesday night was not a game to remember for the The Pandas’ opponent. And-1 got hammered by almost 70 points, which is the second-worst team performance this season behind The Hateful 8’s 88-point massacre.

It just seemed as if And-1 was not playing with any sense of urgency, and just did not put their best foot forward to even give themselves a fighting chance. Their 1-7 record leaves them in 9th in the standings. No one of And-1 managed to reach double-figures, as Ryan Patrick ending with a team-high seven points.

Chris Crespo touched on what went wrong for his squad on the offensive end.