Just a bunch of Goons 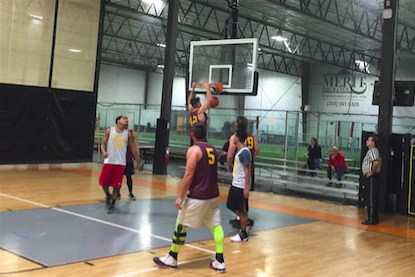 Just a bunch of Goons, or at least that’s what I thought when I heard of one of the newly founded Fall 2016 teams in the Legacy Leagues. The Goon Squad was a team full of fresh faces, unknown abilities, and unfamiliar personalities, so I was unsure what to think, and the rest of the league was unsure what to prepare for when week one tipped off. Everyone quickly learned what they were all about.

Goon Squad, who hails mainly from Monroe, Connecticut, is comprised a tight-knit group of talented players who have had plenty of experience on the court before this point. Half of the Goon Squad and a lot of its star power began their basketball journey at St. Jude School in Monroe, where Matt Marconi, Brandon Massaro, Matt DelMonte and Justin Conte played together every year, only to split as they moved onto high school.

Marconi and DelMonte went on to play at St.Joe’s in Trumbull, playing all four years there and powering the Cadets to a 13-7 record, good for 28 in the state, during their senior year. Massaro went to on to Fairfield Prep to play all four years as well. All during this time these three lifelong teammates continued to play together whenever they could, and those instances came during AAU summer basketball. This is where they really began to understand each others tendencies and get a strong sense of how to be successful.

All of their success doesn’t rely on skills and fundamentals alone. They draw inspiration from another source, the man behind the name “Goon Squad”. Fellow co-captain of Brandon Massaro at Fairfield Prep and a man only few know as “Goon McChicken Van Clam,” Jake Van Sant is the man behind the semi-finalist team.

“He wasn’t able to play, with us so we decided to pay him homage by making him the team mascot,” Massaro said. “He made a couple guest appearances this past season as our coach,” and when asked if he’d make an appearance on the court next season they declined to comment.

The storied teamwork between these Goons has shown on the courts. Goon Squad’s roster includes a Shaq-like big man in Gordon Soper, agile and dynamic playmakers in Mark DelMonte and Chris Folsom and a point guard in Matt Ramos.

From the start you could tell this team loved to play physical basketball and it proved to be very effective, as they cruised to a 2-0 record and began to set the tone for the season ahead. Marconi showed to be the playmaker and scorer for his squad, providing lethal shooting and scoring, with DelMonte contributing on the boards and being a second option to Massaro who was able to distribute at will.

The regular season concluded seeing Goon win four of their last seven games with a huge win over Sportslook in Week Four, as well as tough, but understandable losses to The Brotherhood and Temptations. It seemed like the league had begun to figure how to defeat this tough, gritty squad, as playoff time came around. Goon Squad slipped to the five-seed after the loss to the Temptations in the last week of the regular season.

After a quick decimation of the winless 12-seed Air Ballers team, 79-48, Goon Squad looked towards a rematch with the team that pushed them out of a first round bye. 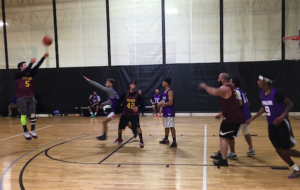 Three quarters into the game against the Temptations it looked as if fortunes were going to stay the same for Goon Squad, as the dominant-looking Temptations team grabbed a six-point lead going into the third quarter. As the fourth quartered rolled around, Goon Squad forced a few but crucial turnovers and errant shots. Those miscues, compounded with the lethal scoring of Marconi, allowed Goon Squad to knot up the score and send the game into overtime.

The connection between Marconi and Massaro shined bright after that, as a unbelievable inbounds pass turned into an alley-ooo from Massaro to Marconi. Marconi all but sealed the deal with his 11-for-13 showing from the free throw stripe, as his team escaped with one of the most thrilling victories in league history.

“That was a war,” exclaimed Massaro.

Unfortunately, the following week they fell to he now two-time champion Brotherhood in the semi-finals, but their toughness and belonging in this league will never be questioned again.

“We went through some growing pains this year, but we know what it takes to win and we think were moving in the right direction,” Massaro said.

This team looks to build on their experience and success of last season this winter in their new look silver jerseys with a familiar name lined across the front: Goon Squad.