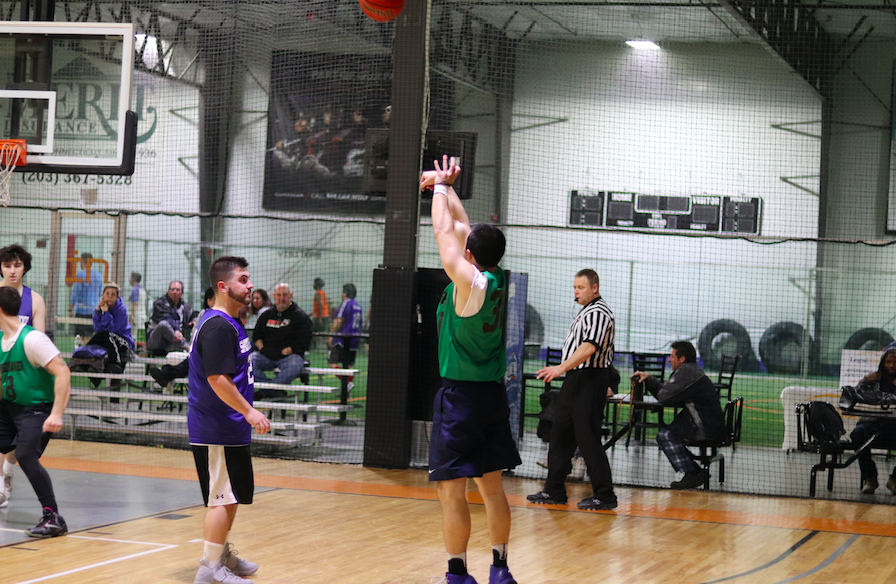 In what looked like Shooters Shoot‘s(0-4) game to lose, Stranger Danger (2-2) crawled their way back with sharpshooting and defense to take home the win on Tuesday night, 55-54.

After not playing well in the first half, Stranger Danger flipped a switch in the 4th quarter to come back from a double-digit point deficit in the 3rd quarter.

“We gave them a lot of really easy second-chance opportunities in the first half,” Stranger Danger’s Tyler Feldman said. “I think the defensive pressure was a lot better in the second half.”

Matt Zocco led the charge for the comeback with a season-high 25 points with  six huge points coming at the free throw line that might’ve been the difference in the outcome. His brother Joey Zocco was also feeling it tonight, scoring 12 points with seven rebounds. Brendan Prutting registered a double-double with 10 points and 10 rebounds.

“Just seeing the ball go through the hoop, it was only a matter of time,” said Matt Zocco.

Stranger Danger was down one point with the ball with the clock ticking down when an offensive foul forced them to foul Shooters Shoot. Luke Riccio missed both free throws, giving Stranger Danger one last chance down the floor. After Matt Zocco missed a 3-pointer, Tyler Feldman tipped the ball back to the shooter, who drew an unusual foul and goaltending call. The call put Stranger Danger up one-point lead, and it ultimately led to Stranger Danger’s  second victory of the season.

It was a heartbreaking loss for Shooters Shoot when it looked like they were bound to pick up their first win of the Winter 18 season. Steve Parravano had a huge game with 14 points and 17 rebounds. Riccio and Kris DiCocco had 18 and 15 points, respectively. The turnovers in the second half especially loomed large as Stranger Danger took advantage.

Next week doesn’t get any easier, as Shooters Shoot get a matchup with the defending back-to-back champion Monstars (3-1). Stranger Danger barely escapes this week, but gets an undefeated team in No Limit (4-0) next Monday. No Limit beat Stranger Danger by just nine points in the Second Round of the Summer 17 season.

“I think we get No Limit next week so we ride this momentum as best we can,” said Feldman. “I just want to outscore Ronte.”