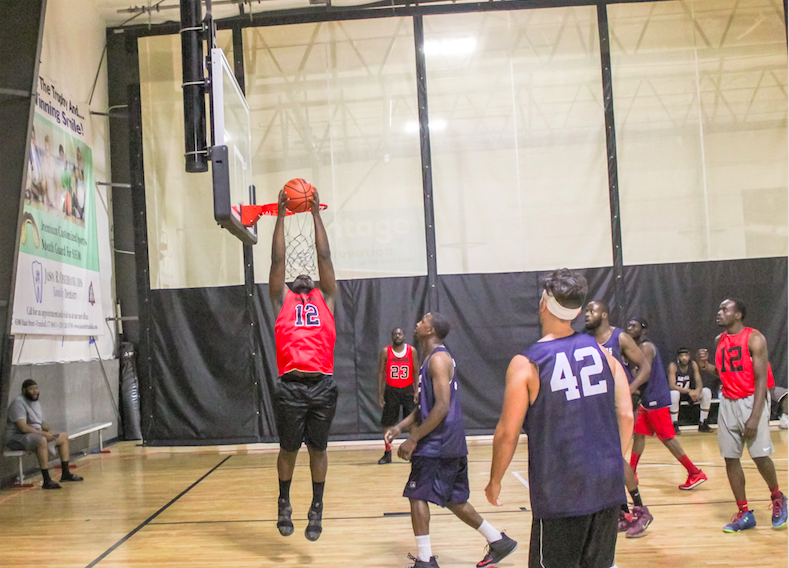 After a sloppy start, the Rim Breakers were able to outscore the Blue Devils 31-to-12 in the 4th quarter to collect a 71-57 victory in Week 7.

In the first three quarters, the Rim Breakers did not look like their normal self, as turnovers combined with poor shooting had them trailing heading into the 4th quarter. That is when things changed for the Rim Breakers as they finally started playing the type of basketball that they are known for.

The defense picked up and the offense followed as the Rim Breakers were firing on all cylinders in the fourth.

“At first I felt nobody was putting in a serious effort, including myself,” Rim Breakers Carl Fairfax said. “But we weren’t worried, their record is 2-4 and we’ve only lost one game”.

Four players for the Rim Breakers scored in double figures, as Chris Leak leads the team with 17 points. Gerald Mclease had 15 points and Keivon Turnbull had 13 points. These three players have really generated points for the Rim Breakers so far this year and helped put them in the position they are in today.

Leak, Mclease, and Turnbull lead the Rim Breakers in points, rebounds, and field goal percentage this season and played a big part in this one.

The Blue Devils came into this Week 7 matchup winners of two-straight and were dominating play until the 4th Quarter. However, the lead would slip away from the Blue Devils when the Rim Breakers went on their big run to seal the game.

Despite the Blue Devils struggles this year, Matt Marconi has been one of the lone bright spots for the team. Marconi added 25 points in the loss tonight and shot 73 percent from the floor. The Blue Devils will be in for a tough test in Week 8 as they take on the undefeated Shocker City.

The Rim Breakers will try to continue playing well as they take on a red-hot Nickstrong (5-2) team in what should make for an intriguing end of the year matchup.