The Summer 17 regular season is now more than half over. Here are five things you need to know from this past week of action:

1. Only eight of 10 games were played this week

Fourth of July Eve caused two teams to forfeit their matchups this week, both of which were bound to be quality, hard-fought games. At 9 p.m. Team Moose accepted defeat to Sportslook, while Lob 203 did the same prior to their 10 p.m. game against The Throne. For many reasons, these are two games you wished were played this week.

As many know by now, Team Moose is on pace to crumble previous defensive records, as they were holding opponents to under 50 points per game through four weeks. So a forfeit here is one less week we get to marvel over a defense unlike any other in Legacy Leagues history. We’ve seen Team Moose force players like Jalen Graham and Tarell Vargas to earn their points on less-than-usual opportunities. It would’ve been fun to see a player like Bryan Acevedo try to face the same adversity. As the playoff picture slowly becomes more evident in the upcoming weeks, it’s certain some team will catch the short-end of the stick against a pretty deceiving 3-2 Team Moose team.

While Team Moose was a convincing favorite before their forfeit, a predetermined winner of The Throne-Lob 203 game wasn’t as certain. The Throne had been putting together a quiet 3-1 start to the season, including a close five-point loss on opening night against the defending champions. We’ve seen a lot of positives from them, but as a new team we all want to see numerous tests come their way before the playoffs. We are also still trying to figure out Lob 203’s ceiling. They have experienced role players on a team led by a good scorers in Eric Singleton and Paul Mirmina. This game would’ve been a great gauge to see where these two teams stand against other competition.

2. Three teams remain winless more than halfway through the season

Now that we’re more than halfway through the regular season, three teams remain unbeaten, while three less fortunate teams — Fry Time, Double Dribblers and Sometimes Y — remain winless. So which of the three have the best chance at avoiding a regular season without victory?

The Double Dribblers had their best opportunity so far to pick up a win this week against STP, but lost by nine. Their remaining opponents (in order) are the Flint Tropics (3-2), Bad Boyz (2-3), Sensual Chocolate (3-2) and Fry Time (0-5). Their remaining schedule yields an 8-12 record this season. Barring absences, I’d expect losses against the Flint Tropics and Sensual Chocolate. If Bernard Brantley can score points more efficiently, the Double Dribblers could upset Bad Boyz if they catch hot hands, but their best remaining shot at a regular season win will come in Week 9 against Fry Time, who is also currently winless.

Fry Time has faced three very tough opponents, but have also lost by 20 and nearly 20 against the Untouchabulls (1-4) and Flight Club (2-3). Given those results against weaker teams (in terms of record), it’s hard to see a win in Fry Time’s future. Their remaining schedule holds an even 10-10 record: STP, The Throne, Sportslook and the Double Dribblers. Again, barring any injuries or absences, I’d expect big losses in the next three weeks before a possible good game in Week 9 against an also winless Double Dribblers team. But even then, their defense might not be able to contain Bernard Brantley.

Sometimes Y has faced the toughest schedule of the three winless teams and it doesn’t get any easier. Their remaining opponents — the Monstars, Flight Club, the Flint Tropics and Lob 203 — have a 12-8 combined record. They’ve been tough to examine where they rank among the bottom feeders since they’ve played such tough teams, but I’d expect losses in three of those four games undoubtedly, with a chance in the Flight Club game. Unfortunately, even that might be a tough game for them.

3. We’re five weeks in but the ‘middle of the pack’ is still unclear

Eleven of the 20 teams right now sit at either 2-3 or 3-2. We’re more than halfway through the regular season but the middle of the pack is still a muddle of uncertainty. It’s pretty clear who the top five or so title contenders are but after that, it’s a guessing game for the most part.

The Brotherhood, No Limit and the Monstars are the three undefeated teams and should be treated as the top teams right now. The next wave of contenders, regardless of record, include The Throne, Team Moose, Sensual Chocolate and the Flint Tropics. But none of these ‘next four’ teams are invincible by any means. All of them are prone to being beat by the middle of the pack teams, which will make for some insanely great playoff matchups. Some of these teams like Team Moose against No Limit and the Flint Tropics and The Throne against the Monstars, have shown they’re capable of competing with the league’s top teams.

When you have the following teams in the middle of the pack with some question marks remaining you know two things: the league is really deep and we have no clue what’ll happen come playoff time. These teams include Run TMC, Redemption, Goon Squad, Sportslook, Stranger Danger, STP,  Bad Boyz and Lob 203. Each team has their own set of questions begging to be answered before the playoffs start. There’s four weeks left in the regular season and that may not be enough time to sort out this 8-15 gap in the hierarchy of teams. A couple of these teams could make a quarterfinals or later push while others might not end up seeing a win in the playoffs. 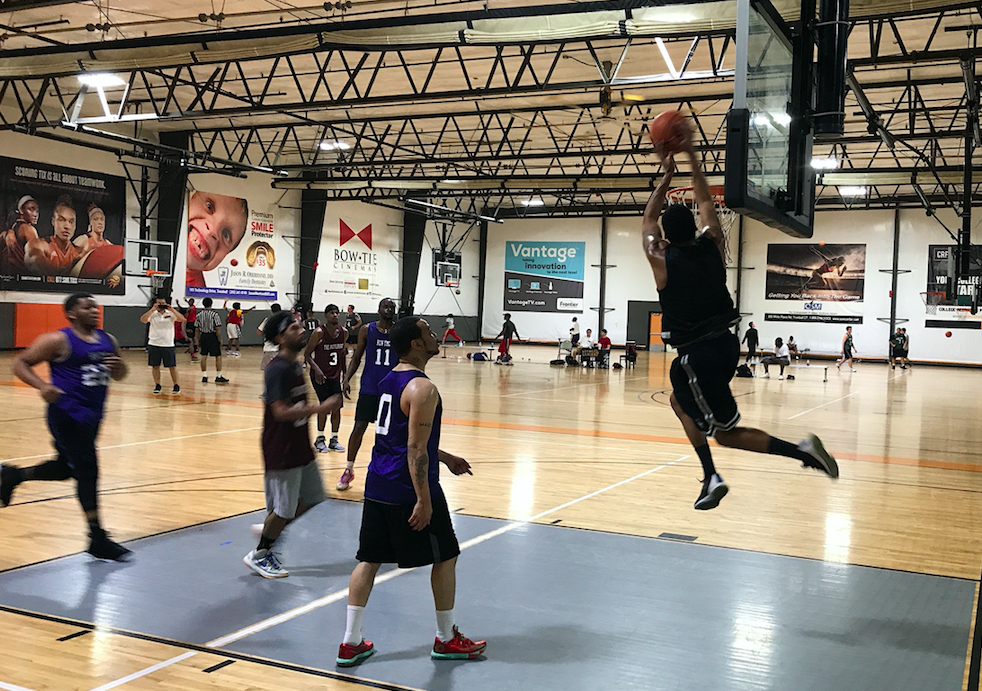 The Brotherhood’s Russ Payton converts one of his many dunks in his team’s win over Run TMC in Week 5.

4. The Brotherhood fought off Run TMC and will face an interesting test next week

Heading into a Week 5 matchup against The Brotherhood, Run TMC thought they could make the game interesting because of their new acquisition, Quincy McDay. Not only was his 35 points not enough to win, but his time with TMC is done for the rest of the season. The Brotherhood continued their undefeated streak with a 13-point win despite trailing after the end of the first quarter and trailing by as much as 12 in the second quarter.

Next week, The Brotherhood will face in interesting opponent in Team Moose. I don’t think they’ll lose, but I think Team Moose can replicate their Week 3 performance against No Limit, where they held No Limit to just 59 points. I wouldn’t be surprised to see The Brotherhood score among the least points in their franchise history. The way Team Moose defends in the paint leads me to believe that Russ Payton could finish with less than 20 points while Mike Davis leads all scorers with a barrage of 3-pointers, which will ultimately pull The Brotherhood away from Team Moose.

I haven’t given a lot of credit to The Brotherhood yet this season, but there hasn’t been much to say about the still undefeated team in three seasons that continues to blow teams out. We keep saying how much deeper this league has gotten over the seasons and that this is The Brotherhood’s season to lose a game, but I’d still leave a chance for them to continue this amazing streak. With Russ and Mike, you have a consistent 40-plus points a game there. Derrick Davis has stepped up this season more than the previous two for The Brotherhood, shooting over 47 percent from deep. Jibril Chisholm remains a high-energy hype man and if Jonathan Robles can make a return, this team could leave everyone frustrated by hoisting another trophy on August 15.

5. The Monstars have a self-controllable on-and-off switch

I’ll admit it, I haven’t been the biggest Monstars supporter this season. I wasn’t around for the Winter 17 season to see how they played and witness their great championship run as a five-seed in the playoffs. So when I gave them some negative responses when they only beat The Throne — who has since proven themselves as a quality 4-1 team — by five, then came out slow and messed around with weaker opponents in three straight weeks, I thought my criticisms were justified. But after their hard-fought win this week against Flint Tropics, it makes sense how the team operates. They have a self-controllable on-and-off switch.

When the Monstars know they’re facing weaker opponents, they play like they know they’ll end up with the win since they have more talent. When they were up 12 against the Throne at halftime in Week 1, it appeared the Monstars turned this switch off and suddenly they found themselves down two with under two minutes to play. But, of course, the Mosntars turned their switch back on and controlled the final moments of the game to win by five. Even though I thought they came out very slow in three straight weeks against weaker opponents, it wasn’t because the Monstars aren’t good; it was because they didn’t really need to play 100 percent for all four quarters to win. They still won by incredible margins. While The Brotherhood and No Limit don’t let up against these weaker teams, the Monstars try to put on highlight reels instead, and that’s okay. It’s what they do and it’s fun to watch.

And when the Monstars entered this week knowing the Flint Tropics were a good team, they made sure to keep their switch on from start to finish. They were actually down three at half but outscored Flint in both the third and fourth quarters to win by a narrow four-point margin.The Langston’s each score over 20 points while Reggie Stewart added 16. Brett Cody struggled from the field but did his job on defense. While I think my tough love on the Monstars was justified through four weeks, now that we’re halfway through the season, I do think the Monstars can compete for the title again this season. As long as they keep their switch on when they need to and and as long as they win, it doesn’t really matter how they win. All that matters is the score at the end of the game.