The Legacy Leagues Summer 17 regular season is nearly halfway complete. Check out this week’s Around the Arc Show I hosted where we go over our best teams, players and performances from Week 4:

Here are five things you need to know about Week 4 action:

1. The Monstars demolished yet another opponent, but can officially prove me wrong if they win next week

It was a typical week for the still-undefeated Monstars, as they started slow but still managed a 59-point over the Untouchabulls. The defending champions rank third in points behind The Brotherhood and No Limit, fifth in rebounds and blocks and second in assists and steals. I don’t deny they’ve been absolutely dominant, since their scoring margin is at +126 this season, meaning they average a 31.5-point win each week. But they’ve still faced opponents with a 5-11 record, three of which combine for a 2-7 record. Next week is their week to prove me wrong.

Last week I said the Monstars were the weakest of the four undefeated teams. And since the 3-0 Flint Tropics lost last week to Team Moose, I still think the Monstars are the weakest undefeated teams because of No Limit and The Brotherhood. But what they can prove to me next week against Flint is they’re right there in the conversation for teams who can possibly knock off the top two title contenders. The Flint Tropics will be motivated after their loss and will try to come out fast, contrary to their performance in the first quarter last week. Aside from possibly The Throne, the Flint Tropics will be the toughest test so far for the Monstars both offensively and defensively.

I have no complaints about the Monstars’ offense; they can clearly compete with any of the other teams in offensive firepower. I will be interested in seeing how much a defense like the Flint Tropics will slow down their production, but I’m even more interested in seeing how the Monstars will react defensively next week against a team that has shown they can score. If they can play lockdown defense and continue to score they way they have been, I’ll be more convinced the Monstars can valiantly defend their title come playoff time.

2. The Flint Tropics offense went from “Semi-Pro” to “amateur” against the league’s top defense 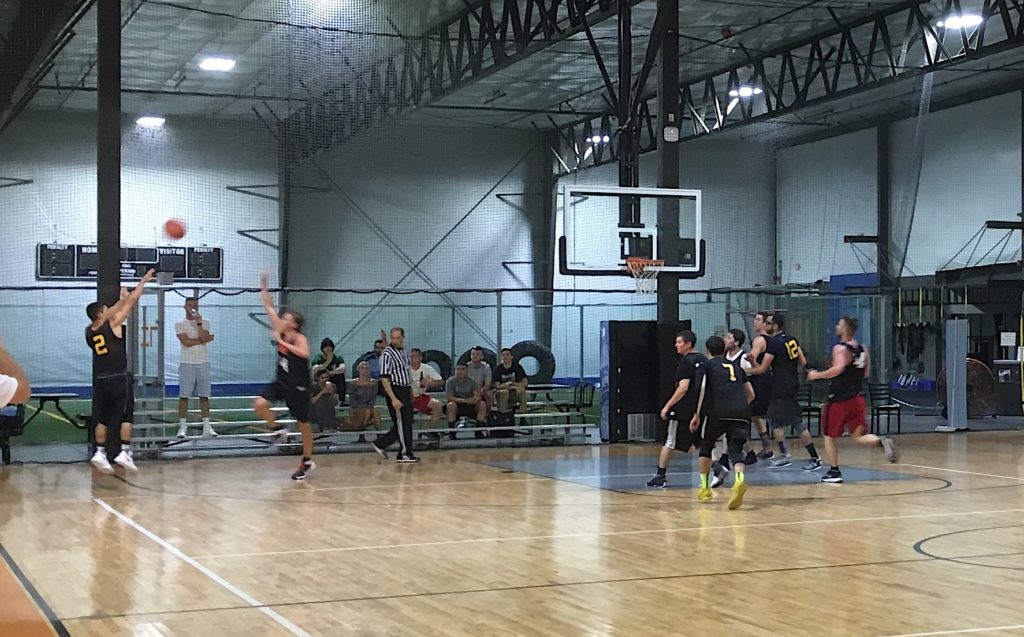 The Flint Tropics Vin Gambino attempts a three-pointer against Team Moose in their Week 4 matchup. Flint struggled from behind the arc, shooting 4-for-27

Of all the new teams, the Flint Tropics made the most noise in the first three weeks of the season, starting 3-0 along with The Brotherhood, No Limit and the Monstars, including a win in which they held Carmine Santorelli to single-digit points. But after averaging 78 per points game to start the season, the Flint Tropics mustered just 38 points in Week 4 against Team Moose. In three of the four quarters, Flint was held to single-digit points, including just one point in the first quarter. To put it simply, Team Moose owned Flint on the defensive end.

This isn’t a knock on Flint as much as it is a testament to how well Team Moose executes their game plan. Through four weeks now, Team Moose is holding their opponents to under 50 points per game. This Team Moose defense was able to hold No Limit to under 60 points when they lost in Week 3, and that’s a No Limit team that still ranks second in the league in points. Team Moose slows the game down like no other team I’ve seen before, limiting the number of possessions per game. This has also allowed them to wear a defense down before finding an easy uncontested shot at the rim.The fact that their were also 31 fouls called in their Week 4 game also played in their favor to limit scoring opportunities with a running clock.

The Flint Tropics looks so impressive as a new team through three weeks because of their depth. But on Monday night, only one player seemed to have an answer to Team Moose’s defense: Mike Bozutto. He finished with 24 points and 12 rebounds. None of his teammates had more than four points and three rebounds. Even with the foul-fest, Flint left too many points at the free throw line. They shot just 6-of-14 from the charity stripe to Team Moose’s 14-of-17. Flint felt the fouls were against them but the game was called pretty evenly. I’m looking forward to see how Flint will respond next week against the defending champions.

3. The Brotherhood conceded the most points in franchise history

Yes, I know. The Brotherhood “wasn’t playing any defense” and if they really wanted to, they probably could’ve held Flight Club to less than 50 points. But hey, give some credit to the young guys. In my opinion, regardless of the final score, I have never seen a team play so hard for 40 minutes against The Brotherhood in a clear blowout. The 91 points Flight Club scored this week is now the most points The Brotherhood has conceded in their three seasons.

Again, I know The Brotherhood was playing practically zero defense, but Flight Club shot 42-of-49 from the field. That’s 85.8 percent. A majority of those points came from what resembled 2-on-1 layups drills around a defender that was just putting their hand up without jumping. What I’m applauding here is not the fact that a team almost scored 100 points on The Brotherhood, but the fact that Flight Club didn’t care that it wasn’t a game from the start. Most teams I’ve watched get blown out by The Brotherhood stop playing and jack up three-pointers for fun. That’s not what happened here.

The Brotherhood allowed 88 points to Sensual Chocolate in Week 1 this season and 80 points to No Limit in Week 1 in the fall season, the two other highest scoring outings against The Brotherhood. Those are two very good teams with plenty of great scorers. So before you use the easy “Oh, The Brotherhood wasn’t playing any defense,” excuse, please tip your caps to a Flight Club team that played as if the score were 0-0 for all 40 minutes in front of their traveling fan club. That’ll go a long way when they play teams they’re better suited for.

4. The Bad Boyz nearly pulled off a signature win against Redemption 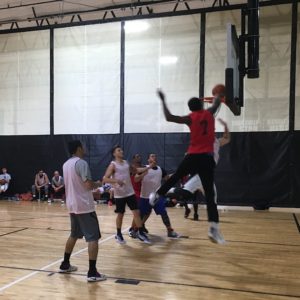 Darrell Foster makes a play in his debut for the Bad Boyz. His team fell in overtime against Redemption, 68-66, in Week 4.

In a week that really didn’t have a clear upset victory — unless you want to include STP over a four-player Goon Squad team — the Bad Boyz were almost the team that shocked the league. After an under-the-radar win in Week 1 over Flight Club, and back-to-back loses to the defending champions and the Flint Tropics, the Bad Boyz came out of nowhere and had Redemption on the ropes before falling in overtime. A shot that swirled around the rim and fell out nearly sent the game into double overtime.

Redemption jumped out to a 10-point lead after the first quarter and it looked like they’d cruise to another victory. But the Bad Boyz outscored Redmeption 40-29 in the middle quarters to take a one-point lead into the final 10 minutes. Ty Drish, Matt Shannon and Jaylon Eggleston stepped up for the Bad Boyz, finishing with 19, 14 and 10 points respectively. The Bad Boyz also matched Redemption in rebounds, a category Redemption usually thrives in.

The Bad Boyz might be just 1-3 right now, but the rest of their schedule is intriguing if they can play as well as they did against Redemption. Their final five opponents, in order, are Sometimes Y, Untouchabulls, Double Dribblers, The Throne and Stranger Danger. There’s a good mix of winnable games and good tests for the Bad Boyz. I could see them winning at least three of those or only winning one or two. Nonetheless, these are all games that will show us what kind of team the Bad Boyz are before playoff time.

5. Several teams made key acquisitions before the deadline that can affect the second half of the regular season

Here’s a quick bullet-point list of some of the biggest acquisitions made before the deadline and why I think it’ll be important in the future.