There’s just two weeks left in the regular season, but there’s still a lot of possible movement in the standings before the playoffs. Here are five things you need to know about action from Week 7.

1. The Brotherhood look like underdogs heading into a Week 8 matchup with No Limit

Coming off their Week 6 defeat against Team Moose, many people expected The Brotherhood to come out extremely motivated, especially with the return of Russ Payton. But without any knowledge of Legacy Leagues prior to watching the Brotherhood take on Goon Squad Monday night, it looked like Goon Squad was the team coming off their first-ever loss in the league. That is, for the first 35 minutes of the game.

The trio of Matt Marconi, DJ Ellis and Brandon Massaro played great offensively, scoring all but nine of Goon Squad’s 66 points. Unfortunately for them, they combined for 10 turnovers. The Brotherhood turned on their vintage press in the fourth quarter, resulting in several clutch steals. The Brotherhood didn’t win the game offensively, but defensively. They forced 15 turnovers to Goon Squad’s one. Even with such a lopsided turnover margin, with two or three less turnovers, Goon Squad would’ve won the game. One could certainly argue that The Brotherhood both literally and figuratively “stole” this game from Goon Squad, winning by just three.

The Brotherhood was out-rebounded by 16, a combination of poor positioning and lack of effort in the paint. They are ranked LAST in the entire league in rebounding. This will be the stat to watch next week against No Limit. I can’t speak for the other analysts, but I think they’ll pick No Limit as the favorites Monday night. In that case, The Brotherhood will need to step it up on the boards to take away second-chance points for No Limit, while also trying to create some for themselves. Mike Davis shot just 2-of-12 from deep last week, and he’ll need to make at least three more of those in order to hand No Limit their first regular season loss since November.

2. If you thought Team Moose was tough to beat, they just got even stronger this past week

Despite their two losses, Team Moose has earned the respect of most of the past competitors and future opponents this season. I’ve even overheard a player say they’d rather face The Brotherhood than Team Moose in the playoffs. After their 80-72 win this week against Run TMC, that sentiment may reign even more truthful, as Team Moose showcased a new player in Week 7. He’s been on their active roster since before the addition deadline, so he was an eligible player Monday night and will need to play in the last two weeks to be eligible for the playoffs.

Trevor Chaves made his Legacy Leagues debut this past week, scoring a game-high 21 points with seven rebounds and four assists. He’s another big man for a team that’s already the most stingy defensive team in the paint. His wingspan is incredibly long, making it almost impossible to go up for layups in the paint. On the offensive end, he  scores right over defenders after backing them down near the rim. His only weakness was his free-throw shooting, going just 1-of-7 from the charity stripe.

Two of the four analysts this week picked Team Moose to win the championship and if Chaves can play in the last two weeks of the season and be present in the playoffs, it’s even more realistic. With Connor Daly and Brad Seaman playing at the self-proclaimed “power guard” position with Kevin Blake and Chaves reeking havoc in the paint, Team Moose definitely has the ability to beat any team in the league.

3. Destin Simmons needs to be more consistent for the Bad Boyz to make a playoff run 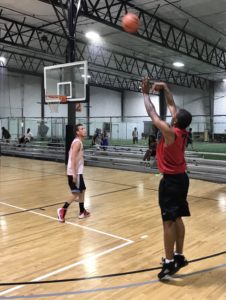 The Bad Boyz Destin Simmons attempts a three against the Double Dribblers in Week 7.

The Bad Boyz Destin Simmons is averaging 26.3 points per game on 57.4 percent shooting. Behind Carmine Santorelli and Mike Davis, he’s scored the third-most points in the league this year. But against the better competition in the league, Simmons has sometimes underperformed from some of his best outings of the season. If the Bad Boyz want to go deep in the playoffs, Simmons along with Jaylon Eggleston will need to be consistent.

Simmons’ three biggest performances this season were against two 0-7 teams and Flight Club. He scored 42 points with nine rebounds in Week 1 against Flight Club, 44 points with seven rebounds against Sometimes Y and 37 points with five rebounds this past week against the Double Dribblers. He has proven that he is going to put up big numbers against the teams he should be scoring profusely against. On the other hand, he’s also had a pair of single-digit outings against Redemption and the Untouchabulls with a combined seven rebounds in those games.

He’s had two 20-point performances against two of the better teams in the league — the Monstars and the Flint Tropics — but he did so on under 50 percent shooting and with only five rebounds in those two games combined. It’s clear that Simmons can score and with a good passing teammate like Eggleston, the Bad Boyz can be a sneaky team in the playoffs. But before then, they have two great tests in The Throne and Stranger Danger. If Simmons can stay consistent in these next two weeks and help win one of these next two games, I’ll be more convinced that the Bad Boyz can win a game or two in the postseason.

4. Redemption dropped their third-straight game this week against the Flint Tropics

For the third week in a row Redemption fell up short and are now are 3-4 this season after making it to the championship in the winter. All year they’ve said that their identity shouldn’t be remembered as Jalen Graham from last season and that they’ll be fine without him. But with three consecutive losses and two tough games in the final two weeks of the regular season, Redemption is 80 minutes away from a 3-6 record heading into the playoffs. 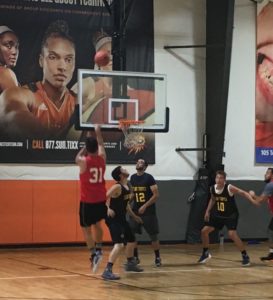 Redemption has a balanced scoring attack with seven of their eight players averaging in between seven and 15 points per game. However, teams without a single player averaging over 15 points per game have had tough times winning games in this league. Even a team as low-scoring as Team Moose has four players averaging at least 15 points per game, three if you exclude Chaves. Redemption commits the third-most fouls in the league, allowing other teams free points from the line. Even though some of their losses come against good teams, it doesn’t seem like they have enough offense to make another deep playoff run.

Two of their last three losses have come against Goon Squad and Stranger Danger, two teams that have also struggled against the top teams and are both below .500 this season. It’s tough to imagine, right now. Redemption taking down teams in the top quarter of the league, unless their defense turns it on and they play a perfect game offensively. They face the two undefeated teams — the Monstars and No Limit — to end the season and I think both of those will be tough losses heading into the postseason. We’ll have to see how the bracket plays out to determine the fate of Redemption this season.

5. Mike and Brett Cody reunited for the first time since the Summer 16 season for the Monstars

Just when you thought the Monstars couldn’t get any deeper since the Langston brothers took over, they managed to add another threat this past week, the Winter 17 Finals MVP. Mike Cody was hiding on the active roster for the Monstars all season and if he can play in the final two weeks, he too will be eligible for another postseason. With so many scoring threats, Mike’s primary role won’t be scoring, but his defense can definitely prove useful down the stretch. He scored eight points on 4-of-4 shooting and dished out two assists, numbers I’d consider to be the norm for him if he is to stay for the rest of the season.

The addition isn’t just significant because the Monstars added a Finals MVP, but because it is the first time since last summer that Brett Cody and Mike Cody have played together in the league. Last summer as members of The Land, the Cody brothers were the team’s top players. Mike averaged 14.5 points per game to Brett’s 19.9. Brett was also on the Legacy Leagues All-Defensive and All-Second teams last summer. So now, the Monstars have two pairs of brothers, the Langstons and the Codys.

Greg and Erick Langston, along with Reggie Stewart, have consistently led the Monstars in scoring, with Kintwon Miles being a great fourth option. Brett, Mike and Ty Alston can be great offensive role players who can score, but also give the Langstons and Stewart rest on the bench when they need it. James Davis and Larry Little will be vital tools on defense to help set the tone defensively for the Monstars. This team is built to win it all for the second season in a row. As long as they take don’t get in each other’s way, accept their roles and play team basketball, I don’t see why the Monstars won’t make it to at least the semifinals.