Records were shattered and streaks were snapped in what turned out to be one of the most historic weeks in Legacy Leagues history. Here are five things you need to know about Week 6’s action:

1. It took 398 days, three seasons and 30 games, but The Brotherhood is undefeated no more

The Chicago Cubs won their first World Series in 108 years. The Atlanta Falcons blew a 28-3 lead in the Super Bowl. UConn women’s basketball lost for the first time in 111 games. Kevin Durant joined the enemy to win a title. Tim Tebow magically became a baseball player. And if you haven’t heard, Donald J. Trump was elected President of the United States. All of these unbelievable events occurred within a year’s time, and all before The Brotherhood lost a game in Legacy Leagues history.

Many believed that this was the season The Brotherhood would finally lose a game after two undefeated seasons last summer and again in the fall. The back-to-back champions took the winter off and in that time, the league became deeper as the league’s capacity grew to 20 teams this summer. But even with the likes of No Limit, Run TMC, Goon Squad, Redemption, Sportslook and Sensual Chocolate, teams who have been either around the league since its inception or become worthy opponents since, a new team with mostly new players and an absolutely new style of basketball never seen before in the league was the team to put the “1” in “29-1.”

The Brotherhood was without Russ Payton and equipped with a banged up Jonathan Robles, but Team Moose’s 14-point win over The Brotherhood is impressive and unprecedented. Team Moose, unlike many teams before them, were able to break the notorious Brotherhood press, allowing them to move past defenders and use smart passing and back-door cuts to get to the rim with ease. It showed in the team’s 35-of-41 shooting and limited The Brotherhood to just eight rebounds. Team Moose didn’t steal a game from The Brotherhood; the won it. Russ Payton or no Russ Payton, Thee Brotherhood finally fell.

2. A new Legacy Leagues scoring and 3-point record was set in a blowout victory

Hopefully not lost in the monumental first loss for The Brotherhood was another historic game just an hour prior to Team Moose’s victory Monday Night. The Monstars’ Greg Langston set a new Legacy Leagues record in both points (68) and three-pointers made (16), passing the marks previously set by Carmine Santorelli as a member of the Temptations and Mike Davis as a member of the Cereal Killers. From what I’ve been informed, The Monstars didn’t go to into the night trying to help Langston break the record, but once he got hot in the first quarter, it became known that breaking the previous 62-point record was realistic.

The still-undefeated Monstars went up against the still-winless Sometimes Y, a very favorable matchup for stat padding. But once Langston opened the game with a barrage of threes without missing – nine straight to be exact – the question began to arise from around the gym: “What’s the points record?” When people were reminded of Santorelli’s 62-point overtime performance against Redemtpion last season, the Monstars had one mission: feed Langston the ball. He shot 26-of-45 (57.8 percent), including 16-of-32 from beyond the arc, another new record.

I don’t want to stir up too much drama, but for the record, Carmine’s 60-plus performance was much more impressive. He scored 62 points on 68.8 percent shooting, while also grabbing seven rebounds, dishing seven assists and snatching three steals. This was also in a hard-fought competitive overtime win against a team that would eventually lose in the finals. Langston’s 68 points, while in 40 minutes instead of Santorelli’s 45, were accompanied by just three rebounds, two assists and three steals against a winless team. I’ll give some respect and remember the new leader in points and 3-pointers made in a game, but I won’t remember this as the most impressive performance in Legacy Leagues history.

3.  The two remaining undefeated teams will each be tested in the final three weeks

Each regular season, the league has had at least one undefeated team heading into the playoffs. Like last season, there are two current undefeated teams: No Limit and The Monstars. It’s going to be very interesting to see if both, just one or neither of these teams will enter the postseason unscathed. Both of them will be heavily tested in each of the remaining three weeks of the season.

First, we’ll take a look at No Limit’s remaining schedule: Lob 203, The Brotherhood and Redemption. They might consider Week 8’s matchup with The Brotherhood as their only big test left, but Lob 203 and Redemption are both better than their record’s indicate. Lob 203 is 2-4 this season, but one of those losses was because of a forfeit, and the other three were quality losses to Team Moose, Sensual Chocolate and Sportslook. They also have a quality win over Run TMC in Week 1. Sportslook (3-3) is still a tough team to read this season, with their best win being Stranger Danger. But with Bryan Acevedo, Sportslook can get hot. But we’re all waiting for Week 8 because the Brotherhood-No Limit matchup has been circled on our calendar’s since the schedule release.

The Monstars have escaped tests against The Throne and the Flint Tropics but will also face three quality opponents to end the regular season: Sportslook, Redemption and Sensual Chocolate. Sportslook, like I said, will always be a solid upset pick with Bryan Acevedo. Redemption, although they’ve dropped a couple straight games, were still just in the finals in the winter and play really tough interior defense. But the matchup I’m most anticipating is that Week 9 game against Sensual Chocolate. That game has playoff implications written all over it, especially if Sensual Chocolate extends their winning streak to six by then after starting the season 0-2. 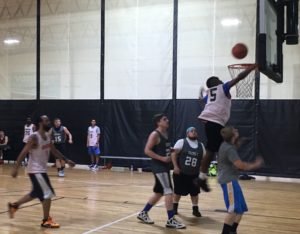 4.  Joe Baccielo returned to the court for The Throne

For just the second time this season, Joe Baccielo suited up for The Throne. He scored 41 points in his debut in Week 2 and this week he scored 30 points against Flight Club, as The Throne moved to 5-1 on the season. He might’ve injured himself in the winning effort, so hopefully it isn’t too serious because while The Throne has impressed as a new team this season even without Baccielo, his presence could earn The Throne an extra win or two in the postseason.

In his two games this season, Baccielo is averaging 35.5 points per game on 61.7 percent shooting, while also averaging 4.5 rebounds per game. They most likely didn’t need him to win this past week against Flight Club, but he was definitely needs in The Throne’s Week 2 win against Stranger Danger, where they won by just one point. Dashawn Moffat and Jacobson Jean-Baptiste have played well atop their team’s scoring totals so far this season in Baccielo’s absences, but having Baccielo obviously won’t hurt them.

In the two games Baccielo has played, Moffat has 13 assists, 10 of which came in last week’s double-double. In all other games: just one. Having a natural scorer like Baccielo on the court will definitely help The Throne in that aspect. Just one big thing to remember, Baccielo needs to play on at least one of his team’s last three games to become eligible to play in the playoffs.

Run TMC’s underwhelming 2-4 record has been very surprising (at least to me) this season. A lot of people make fun of Joey Zocco for being able to do whatever he wants since he’s the commissioner, but that “power” can also be applied to his team’s schedule. And here’s the thing,  Run TMC never faces an easy schedule by any means. Even though they have a lot of talent that should win them more than two games in six weeks, they have arguably the toughest schedule this season.

Lob 203, STP, Redemption, Double Dribblers, The Brotherhood, No Limit, Team Moose, Stranger Danger, Goon Squad. Those are Run TMC’s nine regular season opponents. Three of those teams are currently under .500, while the other six are all currently in the top-11 in the league standings and combine for a 25-11 record. With their 2-4 record, I could definitely see them dropping one or two of their final three games to head into the playoffs with a 3-6 or 4-5 record. I don’t see them winning out so they’ll surely be below .500 entering the postseason.

All I’m saying is Run TMC is a very misleading below .500 team because of their strength of schedule. They don’t have a real big quality win, their wins being over STP and Double Dribblers and, for what I think they should be, I’d consider Lob 203 a bad loss for them this season. They’re still figuring things out; they’ve lost two players this season, too. So even though they might end the season with a very low seed, they’ll be the most misleading seed, which could make for a good upset or two. I’m not saying Run TMC is a title contender, but they’ll still make noise come playoff time no matter what their seed is. Joey wants that tough Run TMC schedule for a reason. They’ll be tested for when it matters most.