Limit-less: From free agents to Finals 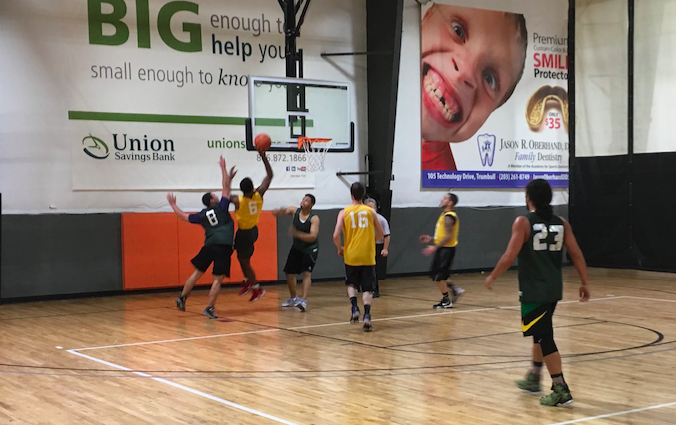 After winning a three-on-three basketball tournament in Derby during the summer time, Tarell Vargas, Howie Miller and Ronte Byrd wanted to bring their talents to the Legacy Leagues for a chance to win a different kind of championship. However, they needed to find a fourth man to complete the roster for the winter season. Unable to join the three-on-three tournament, John Rullan from Shelton was the perfect choice to complete the roster. Add in Jay Ramos, Javier Lopez, and Nick Grasso to give the team more depth, and No Limit was created.

Vargas and Miller grew up together playing on the same junior varsity basketball team for Ansonia, but as time went on Vargas continued to play for the varsity team for three years as Miller was sidelined due to an elbow injury. With Miller out, Vargas and the rest of the Ansonia team desperately missed Miller’s athletic ability on both sides of the court.

“I always said he owes me a championship because he was our missing piece to my high school’s state championship run in 2011,” Vargas said.

Despite falling short of a state title, it wasn’t the end for the dynamic duo of Vargas and Miller. The four of them played in the valley for eight years together and wanted to finish what they started during high school. All they needed was a few other pieces to complete a powerful team that they knew could play for the Legacy Leagues championship.

As the Legacy Leagues season began, no one expected the week one matchup between the defending champions from season one, The Brotherhood, and No Limit to be a preview of the Fall 2016 Finals.

The Brotherhood had every intention to continue their undefeated record, while No Limit tried everything in their will power to end the impressive winning streak, giving The Brotherhood a run for their money, 56-55, after three quarters of play. No Limit failed to ruin the win streak, and fell to the defending champions, 86-80. 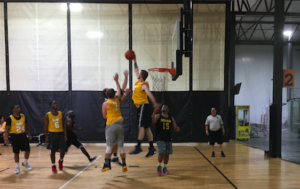 No Limit did not take the loss lightly as they moved through week six with an impressive five straight wins. With the spectacular start, No Limit was getting the job done with only a six-man roster, whereas, teams like The Brotherhood and other competitive teams ran with seven to eight guys. The four ten-minute quarter format in the Legacy Leagues can pose a challenge for undermanned teams.

After week six, No Limit began to have another name for Vargas, Rullan and Miller: ‘The Three-Headed Monster’. It seemed as though no team or player could stop these three from scoring. With Miller and Rullan hitting three’s from behind the arc on a consistent basis and Vargas driving to the hoop, other players tended to stay out of the way.

Desperately wanting to change the name from “The Three-Headed Monster” to the “Core Four,” Byrd did everything he could during the game, in interviews and on social media. Soon Byrd would get his moment of fame.

Coming into week seven high on confidence, No Limit assumed the game between the weak 2-4 Run TMC squad would be a breeze. Little did they know that the new addition Reggie Stewart was not going to let them off easy. No Limit was taking reckless shots from way beyond the arc, and not facilitating the ball to the whole team like they had earlier in the season. Stewart and the rest of Run TMC ran No Limit out of the gym, 77-67, and handed No Limit their second loss of the season.

Going into week nine with a 6-2 record, No Limit faced off against the feeble Kekambas to finish off the regular season. During the second quarter, Rullan strongly disagreed with a call and let his emotions get the best of his, resulting an ejection from that game which also disqualified him from his team’s quarterfinals matchup.

With the regular season in the books, Vargas was named Legacy Leagues MVP, averaging 22 points, 9.8 rebounds, 4.8 assists and 2.4 blocks per game. Vargas did not come for an MVP award, however; he came to win the title with his boys from home. In the quarterfinals, No Limit matched up against the Kekambas for a second time. Without Rullan, Byrd and the rest of the bench had to step up in order to advance to the semifinals, 57-54, which included a game-winning Byrd three-pointer.

“Javi (Lopez) and Jay (Ramos) became good role players and stepped up when Rullan and Howie were out.” No Limit’s Ronte Byrd said.

With only one person on the bench against the Kekambas, they had to be smart with their substitutions. With Lopez and Ramos’ support, No Limit was going to the semifinals to get revenge against the hot Run TMC team who beat them in week seven. With Rullan back in and the ‘Three-Headed Monster’ back to its normal self, No Limit was not going to let Run TMC beat them again.

Vargas and Reggie Stewart were going back-and-forth, matching each others points. The ‘Three-Headed Monster’ combined for 63 of their team’s 73 points, while Byrd had the other 10 points. Run TMC’s Reggie Stewart had an impressive 41 points, yet Run TMC failed to complete an eight-point comeback in the final three minutes, losing by one, 73-72. No Limit was heading to the Legacy League Finals to face the still unbeaten Brotherhood.

Again, No Limit fell short in a valiant effort to end Brotherhood’s winning streak, 66-58. No Limit showed resilience during both match-ups against the now two-time defending champs, but The Brotherhood’s tenacity on defense and their ability to get to the rack showed the newcomers to the league what needs to be done to be champs.

With Brotherhood not returning next season, No Limit will look to claim the coveted title this winter. Too deepen their bench, No Limit is adding Kevin Rivera and Tim Adanti from The Brotherhood team who beat them in the Fall Finals…..

“We didn’t didn’t drop anyone. It’s the same squad, we just added Tim Adanti and Kevin Rivera, who killed us in the championship, and they will be a great fit,” Byrd said. “We had a great run last season. Everyone counted us out. We were just the yellow team. No, we are a powerhouse, and with the new additions this year, we’re going to win the ship.”