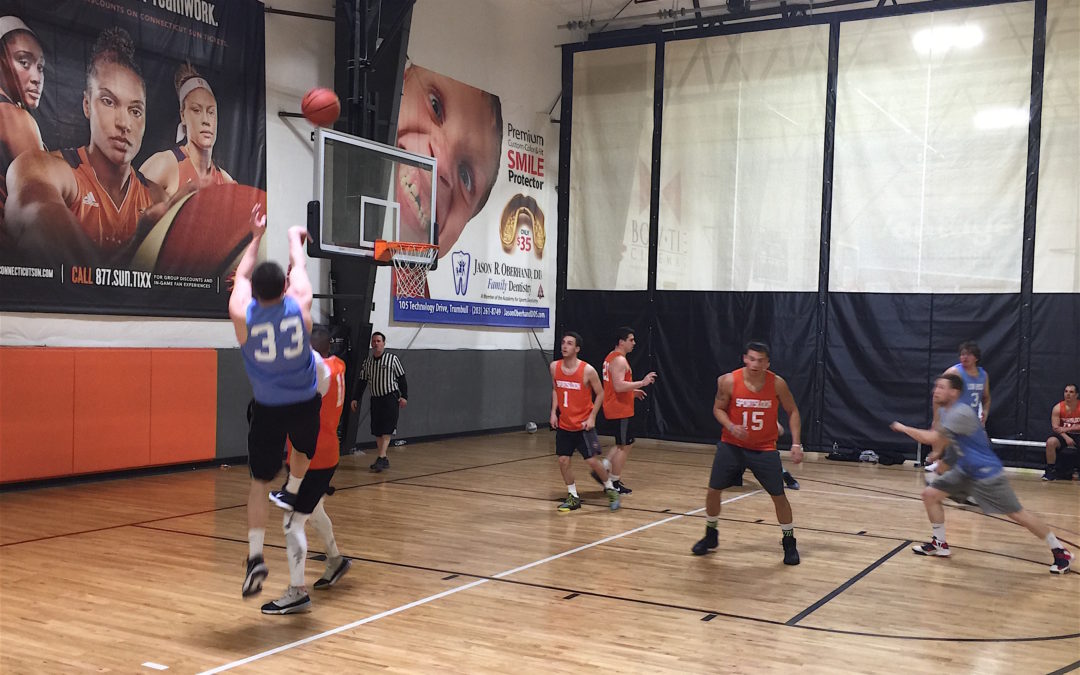 Despite shooting an unpromising thirty-seven percent from the floor, Lob 203 was still able to pull off a 57-40 win over a sloppy Sportslook team in a week 9 matchup both teams knew they needed to win.

“We got that done with severe execution, determination, crashing the offensive glass and a man by the name of Paul [Mirmina] who had the ultimate light that just jolted our team ready to go,” Andrew Sampietro said. “We are going to go undefeated for the rest of the season.”

Mirmina finished the game with a game-high 17 points and grabbed six boards as he was the primary facilitator for his squad. Mirmina is currently second on the team in points per game, and as Sampietro would simply put it; “Nobody in the league can guard him.”

It was apparent from the start that Sportslook would have a tough night as the team was without its two perennial playmakers in Scott Benzing and Tyrell Holmes, giving Lob 203 an opportunity to take advantage of their absences. John Brolet and Mirmina were key to getting an edge early, however Christian Allen and Nick Bacarella would respond for Sportslook as the game would be tied at 13 a piece after the first quarter.

“We played them last season and they don’t have anyone that they had last year, but it was still a pretty good matchup,” Sampietro said. “Ultimately we just tried to get out on the fast break and tire them out because we kind of had more size on them and it worked out in our favor.”

Andrew Martino was crucial in giving his squad an eleven point cushion, leading 33-22 late in the second quarter. Martino and Bacarella matched up well in this one and would go back-and-forth until late in the fourth.

Lob 203 would go on a 7-0 run to start the second half, as the team seemed to really be gelling, while Sportslook was as dysfunctional as ever. Scott Benzing would make an appearance in the second half for Sportslook, giving them not only an extra body on the floor, but also a proven scoring option.

The exhuberant Lob 203 squad would go on an eventual 14-3 run, and would not look back. Sportlook truly defeated themselves in this one as they shot twenty-four percent from the floor as a team.

“We’re as comfortable as anybody. We faced the hardest five teams in the first five games and hung in there,” Sampietro said. “Three of them were a loss by less than than points, so we’re just trying to be on the winning end of those games.”

Upon falling to 1-6 overall on the season, Sportslook will face both Stranger and Run TMC next week in hopes of boosting their playoff odds. Lob 203 will also have two more game to play next week as they will matchup against Run TMC and the Renegades. With the win, Lob 203 improves to 2-5 and will look to finish its season strong with the playoffs right around the corner.

“Renegades is our cross town rival. We’re definitely going to take them down without too much trouble,” Sampietro said. “Run TMC is a payback game because they stole one on us last season and we were not ready to play them, but we’re pretty prepared for them this year.”