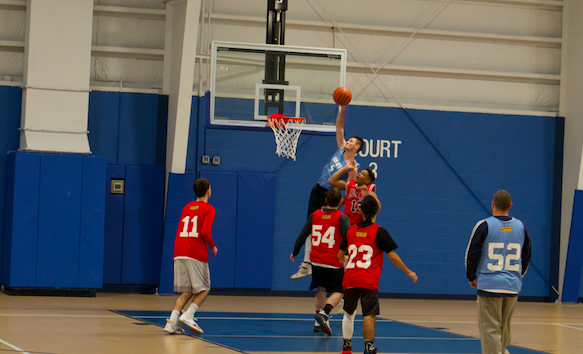 Lob City proved why they were ranked no. 1 in the Week 1 Power Rankings after they demolished Duje’s Boys, 100-50, on Wednesday night.

They held Duje’s Boys to 18 total second half points as they took control of the game after the intermission. Every player on the roster scored as their dominance from Week 1 transferred nicely into Week 2.

Corey Crawford led the way with 27 points, six rebounds, six assists and two steals. Joey Coro also chipped in 21 points, 12 rebounds, five blocks and three steals. This is something that Lob City is going to rely on, dominant performances from their clutch players. The scary thing is that their entire team is capable of having these types of stat book-stuffing nights.

Duje’s Boys actually kept it close early, as they led 12-10 halfway through the first quarter. After that though, Lob City’s ferocious defense and lights-out shooters took over as they finished that quarter going on 14-6 run.

The fact that Duje’s Boys showed promise in the early minutes is a good sign for them, but putting that together for a full 40 minutes is a tough task.

Duje’s Boys schedule gets no easier as they take on yet another veteran team in Week 3 in the Halfway Crooks. As a new team, facing teams who have played multiple seasons in the league is never easy.

Lob City gets ready for a Finals rematch as they square off against the also undefeated Boom-Shakalaka next week.