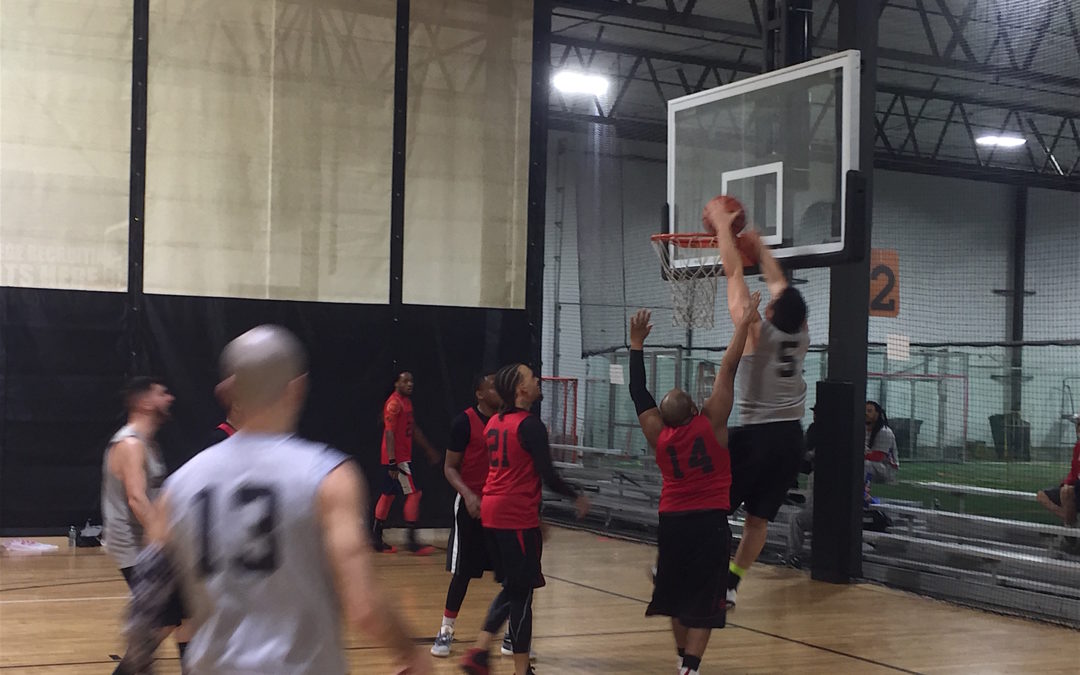 With no shortage of late game heroics, dynamic duo Matt Marconi and Brandon Massaro were crucial in the Goon Squad‘s comeback to not only force an overtime, but eventually get the 69 to 68 win over The Firm.

“It was a tough one,” Goon Squad’s Matt Marconi said. “We thought coming into the season that we would be a lot better then we’re showing right now. We needed to get that win coming off two 20-point blowouts, so we just got to keep working and can’t get too confident.”

From the tip off, The Firm was the more physically opposing team and took advantage of Goon Squad’s sloppy play. It seemed as though The Firm was grabbing every rebound and dunking every ball as they were running away with the 27-18 lead at the half.

While Goon Squad may have had a disappointing first half, it was apparent that Marconi and Massaro would not let their squad go down easy. The team was missing two essential players in DJ Ellis and Justin Green, meaning Marconi would have to play a more physical game, which was evident from his phenomenal free-throw shooting (18-20).

“I think we’re the most athletic and fundamental basketball team, but we got a lot of new kids who don’t really play on small hoops,” Marcon saidi. “Hopefully we will build momentum from that game.”

As for The Firm, Markey DesRuisseaux was bouncing out of the gym as he finished the night with a team high in both points (21) and rebounds (12). Larry Littles and Deshawn Hall also had themselves a game, scoring in double digits and helping to push the ball, especially on the fast break.

The climax moment of the game occurred with only seconds left as Matt Marconi sunk the deep to help send his team into overtime.

“It was all Mark [DelMonte]. I told him if he didn’t give me the ball, I was going to literally kill him,” Marconi said. “I was all the way at the white line and said give me the ball. He gave me the ball and luckily it fell”

The Firm were only moments away from improving to 4-1, however after the loss, they will now look to get their fourth win against a very similar team in the Renegades. As for the Goon Squad, they will now look to make it back to back against the undefeated Temptations crew, who defeated Sportslook, 88-70, on Tuesday night.

“It’s going to be a tough game,” Marconi said. “I think we beat them in the last playoffs in triple OT, so Carmine’s going to remember that. I actually think they’re a better team this time around and obviously Carmine’s Carmine, so he’s going to get his, but we just got a focus on the other guys as well.”