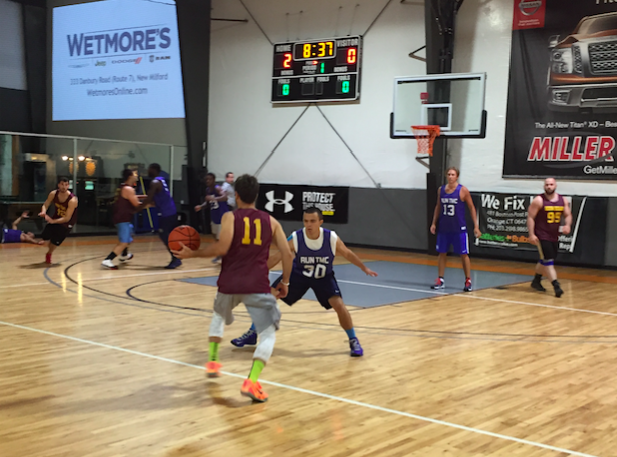 Behind Matt Marconi’s 28 points, Goon Squad started off on the right foot Tuesday night by holding off Run TMC, 65-59.

Early on, the Zocco brothers and Run TMC jumped out to a 27- 24 halftime lead, showing the young upstart squad how things are done in the Legacy Leagues, but Goon Squad found their rhythm after the break.

“We started meshing well together in the 2nd half, capitalizing on fast breaks, turnovers and rebounding the ball,” Goon Squad’s Christian Allen said. “That’s what got us the W tonight.”

Goon Squad came out of halftime posting a whopping 32 points in the third quarter, while holding Run TMC to 13 in the period. Run TMC fought  back from 16 points down to pull within six late in the fourth.  Fortunately for The Goon Squad, Run TMC could not find the bottom of the net in their final push, and struggled from deep the entire game (8-29).

Run TMC was lead by the Commissioner Joey Zocco’s 13 points. The rest of the squad followed suit as Shaq Holman, Matt Zocco, and Kevin Blake all scored in the double digits. Both Holman and Blake cleaned the glass, snatching seven rebounds each.