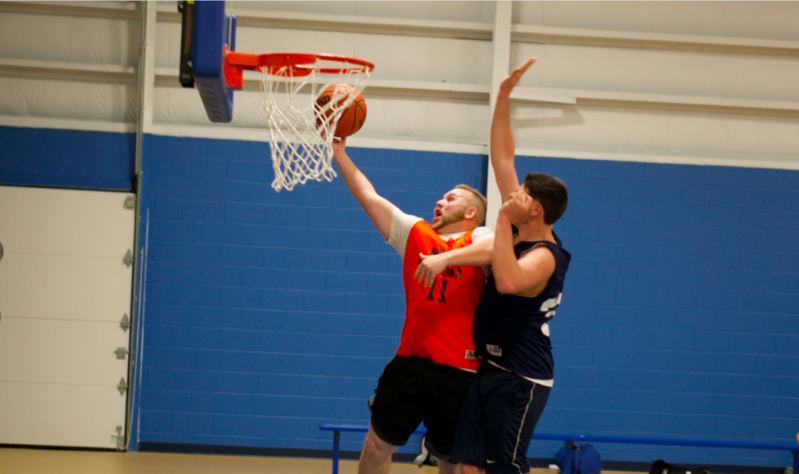 Lucas Martin absolutely lit it up from the three-point line in the fourth quarter, finishing with 31 points in the game and leading his Boom-Shakalaka team to a victory over the Werewolves, 68-49. Jeremy DiMicco made his presence felt on both ends of the floor as he finished with 14 points and 12 rebounds.

Dave Campbell was the only one on the Werewolves who was able to get anything going offensively Wednesday night, finishing with 23 points.

Both teams came out aggressive early, but it was Boom-Shakalaka who held a slight edge at the end of the first quarter. Campbell came off the bench and was instant offense for the Werewolves, scoring however he pleased. They were able to stretch the lead to 10 through early parts of the second quarter.

Boom-Shakalaka continued to relentlessly attack the rim which got them to the free throw line often, while also getting fouled on two three-point attempts. They struggled from the line for most of the night as they shot 11-for-22 on the night.

Boom-Shakalaka was able to contain Brian Heston for the most part, even though he finished with 17 points and 10 rebounds. Gino Forte also struggled to find his stroke.

The teams were neck and neck heading into the fourth quarter until Lucas Martin caught fire, which led Boom-Shakalaka to outscore the Werewolves 30-10 in the final ten minutes.

“My motto is ‘shooters shoot’ so i catch the ball, see one go down and keep shooting more,” Martin said.

He did just that pulling from no-mans land, as the Werewolves watched the game slip away. They only had three players record more than one made field goal, so they’re definitely going to need some guys to step up next week against the Swish Kabobs. Meanwhile Boom-Shakalaka will try to avenge their Finals loss to Lob City in a Week 3 showdown.