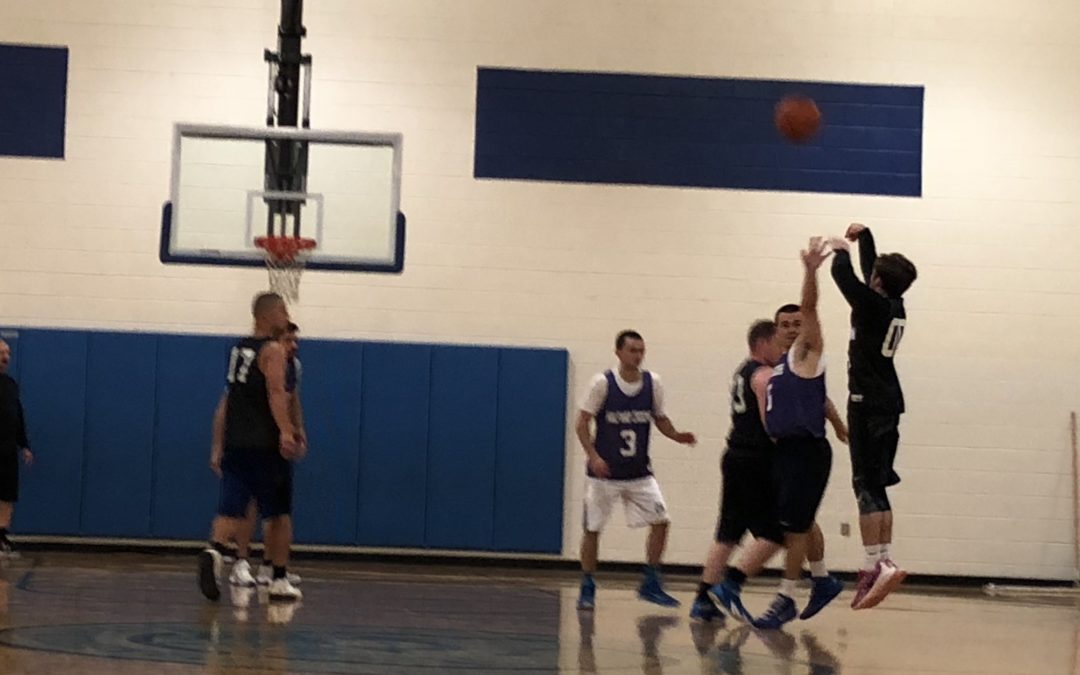 Matt Camara was feeling himself from downtown as well, knocking down four three-pointers to finish with 23 points of his own. Jared Hanson and Dylan Lincoln carried most of the offensive load for the Halfway Crooks, finishing with 17 and 15 points respectively.

Slow starts have been the story of the Halfway Crooks season and Wednesday night was no different. They went scoreless through the first five minutes of the game, and Boom-Shakalaka was able to capitalize finishing the first quarter up 14-5.

The Halfway Crooks were able to pick it up offensively in the second quarter, but still faced an 11-point half time deficit. The third quarter was were Boom-Shakalaka put their stamp on the game.

Martin knocked down a game-high seven three pointers, but was quick to defer the spot light to his teammates after the game.

“Trevor (DiMicco) was good at driving into the lane and kicking out to open shooters. and we were able to knock them down,” Martin said.

Boom-Shakalaka did a great job of controlling the glass, out-reboundeding the Halfway Crooks by 11, largely due to the efforts of Jeremy DiMicco. He posted a double-double, finishing with 15 points and 17 rebounds, including a game-high five offensive rebounds.

With all of the shooters that Boom-Shakalaka has, opponents can’t allow them to control the offensive glass and get extra possessions. They tend to find the open shooters on the perimeter, and most of the time they make teams pay. They were also missing their second-leading rebounder in Ryan Rawnsley, so the damage could have been much worse.

Boom hopes to continue their success next week by doing what they do best. “Keep up the pressure, fast break as much as we can, and shoot the ball well,” Martin said.

They’re the only team who has the size and shooting to match up with the still-undefeated Alliance, so they’ll need to maintain that hot shooting in the playoffs if they want to have a chance to knock off the heavy favorite.