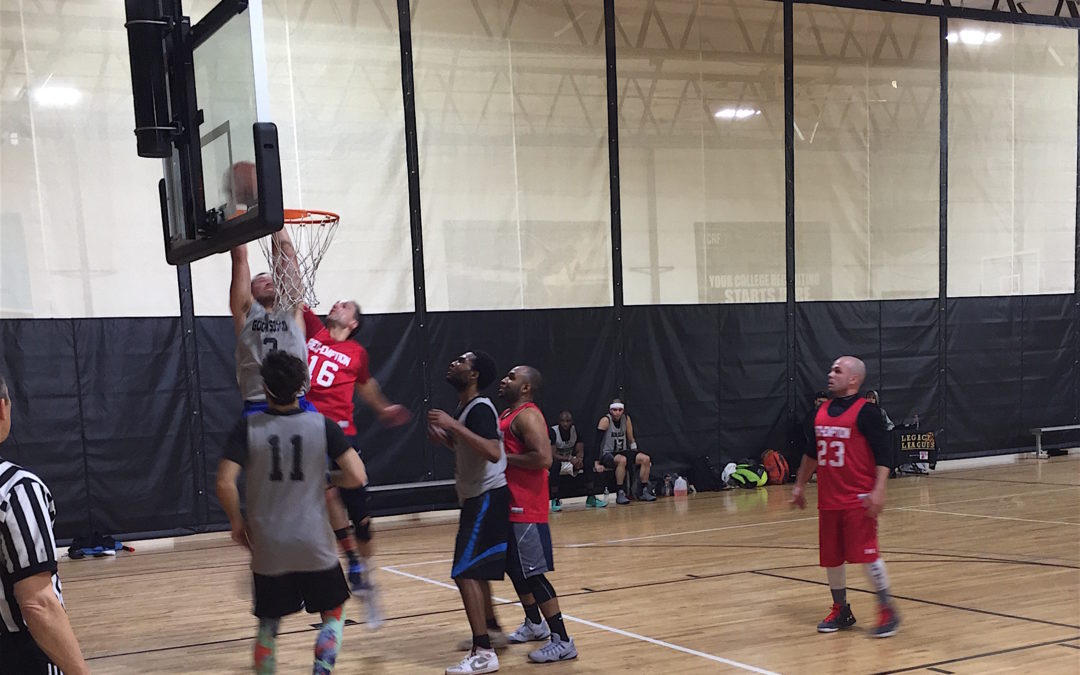 Brandon Massaro shot the lights out on his birthday in Goon Squad’s 82-70 win over Red-Emption. Teammate Justin Green stepped up his game as well as both players put up 20-plus points and shot a combined 16-25 from the floor.

“It was a team effort. We were making our shots, which was key for us. We put up 45 points or something against Lob 203 and then we come out tonight and put up 82. We have to make sure we are more consistent moving forward into the playoffs,” Goon Squad’s Brandon Massaro said

It was evident prior to tipoff that Red-Emption would have a long night as the team was without key role players in Christian Terrell, Matt Pils and Stanley Geter. While the team only had five players, MVP frontrunner Jalen Graham showed up to play and would not allow Goon Squad to get an easy win by any means.

Both teams shot poorly from the onset, however Jalen Graham quickly locked in and was in typical form, taking over early. Likewise, Justin Green played an aggressive role for Goon Squad while Matt Marconi and Brandon Massaro took over much of the scoring load.

“[Graham] had his way pretty much in the first half. In the second half, they only had five guys, so I think they started getting a little tired. We made sure we got back in defense where he got most of his points in the first half,” Massaro said.

The game would see several lead changes throughout the first half and would ultimately come down to who could finish in the crucial moments. Jalen Graham had a game-high 19 points as Red-Emption took a 36-35 lead at the half.

“We kept it close in the first half and that’s what we wanted to do,” Massaro said. “We knew if we had it close in the second half that we’d be able to stretch it out and get out of here with a win.”

Goon Squad would take a solid lead coming out of the break, however Red-Emption soon cut the game at 50 a piece mid-way through the third quarter. Scott Corchard and Graham were crucial in this comeback, however Massaro would not allow the slashing guards to continue to dominate. Corchard ended up injuring his foot and would sit out for much of the second half, providing a window of opportunity for Goon Squad.

It was anybody’s game as Red-Emption cut the lead down to 57-54 headed into the fourth quarter. In the crucial moments of the game, DJ Ellis and Justin Green would take turns face-guarding the lethal scorer Graham, while Massaro took advantage of Corchard’s injury.

“We wanted to focus on defense,” Massaro said. “Defense leads to offense. We wanted to stop them from getting fast breaks and I think we did that.”

Green would hit three clutch back-to-back three-pointers and would score eight straight points late in the fourth quarter. Massaro also caught fire in this game and would hit some crucial shots as he would finish with 21 points, shooting 70 percent from the floor.

“I’ve been ice cold all year and then the second half of last game I started shooting it a little better and it carried over into today,” Massaro said.

With the win, Goon Squad improves to 4-4 on the season and will have an opportunity to take the 6 seed headed into the playoffs. As for Red-emption, they finish the season at 6-3, and will wait for Tuesday night’s games to figure out their seeding.